A group of thugs tried to rob Rep. Ryan Bizzarro and fellow Rep. Marty Flynn (D-Lackawanna County) at gunpoint. It turned out to be a bad night for the bad guys. 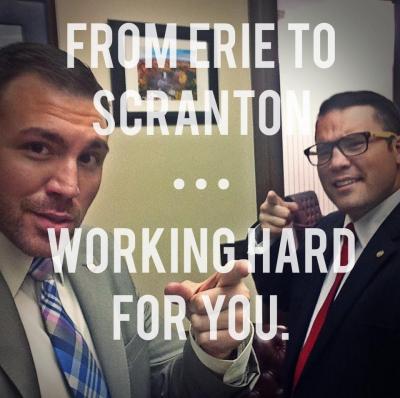 State Rep. Ryan Bizzarro and his colleague in the Pa General Assembly, Rep. Marty Flynn were the victims of an attempted robbed at gunpoint in Harrisburg around 11PM Tuesday night.

Two men wearing bandanas reportedly approached Bizzarro and Flynn about ten blocks from the Capitol while a third suspect waited in a nearby vehicle, according to published reports.

Police have not yet released details of the incident. But according to CapitolWire.com, Flynn, a former prison guard and MMA fighter was carrying a gun on Tuesday night and exchanged gunfire with the assailants.

The suspects were apprehended by police and are in custody this morning.

Both Flynn and Bizzarro were unharmed in the incident and are back at work this morning.

Year of the Nurse