One of the summer's first blockbusters hits the big screen. 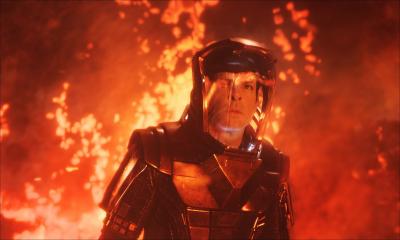 After exiting an IMAX screening of director J.J. Abrams' second "Star Trek" outing, one of my friends, a Trek newbie, had several questions.

"Is Spock a robot?" followed by, "What was that whole thing about old Spock?" were his first words as we stepped out into the parking lot.

I tried to explain to him the series' parallel timelines, how Abrams' films were part of an alternate universe through time travel, as explained in the 2009 film, and that old Spock (Leonard Nimoy) was part of the original crew of the Enterprise.

"And that's where Picard fits in, right?" he replied, much to my chagrin.

Those who don't get the humor there need not fret. I wouldn't consider myself a true, hardcore fan of the Trek mythology either, despite having seen quite a few TV episodes and movies from the franchise's nearly 50-year legacy. Still, I'm quite partial to what is widely regarded as the series' high point, 1982's "Wrath of Khan," the second of the feature films. Happily, so is J.J. Abrams.

"Into Darkness" opens with the usual suspects, Captain Kirk (Chris Pine) and Dr. McCoy (Karl Urban) running from a primitive tribal race that doesn't understand that the rest of the Enterprise crew is trying to save their people from an active volcano that threatens to destroy their planet. Spock (Zachary Quinto), beaming himself into the heart of the volcano,  insists the crew leave him behind in order for him to freeze the impending eruption, but grows agitated when Kirk disobeys protocol to save him, in the process allowing the natives to discover the presence of the Enterprise technology and thus disrupting their natural evolution

This is all limited to the first ten minutes, a kinetic attention-getter that serves as a helpful taste of the breakneck pace that's to come.

Later, we're introduced to John Harrison (Benedict Cumberbatch), a former Federation operative who's on a vendetta against the government, blowing up buildings and terrorizing citizens. After the death of a friend, Kirk and his team are granted permission by Admiral Marcus (Peter Weller) to stop Harrison, and in the process meeting friends (Carol Marcus, played by Alice Eve) and foes (Klingons!), all while examining themes of revenge, betrayal, human emotion, and self-sacrifice.

As with the 2009 "Trek," Abrams' "Into Darkness" retains that film's more fantastical, less scientific approach, albeit slightly darker in tone, as per its title. Abrams' dynamic style and ever-moving camera ensures there is never a dull moment, and his cast is still as spot-on as ever, neatly filling the shoes of Shater, Nimoy, and Co.

Despite retaining many of the quirks that made fans squirm last time around (Spock and Uhura are still a thing, for some reason), Abrams' films are so entertaining because, despite changes, they stay true to the underlying appeal of the franchise – its concern for humanity. We watch as Kirk and Uhura are flabbergasted at Spock's seeming indifference to his near-death experience. We watch as Spock starts to see the value, and the pain, in letting his human side show. And we watch as Kirk learns the importance of being captain of the Enterprise and the heavy responsibility it carries.

I'd venture to say Abrams and his writing team, being inherently more cinematic writers, fare far better with this material than their television-confined counterparts, whose limitations carried over into the feature films. Writers Damon Lindelof, Robert Orci, and Alex Kurtzman seem better in-tune with what the series always aspired to be, illuminating its best qualities and creating something more progressive, more vibrant, and more palatable for the general populace than ever before. No small feat for a franchise whose high point sees William Shatner belting "KHAAAAAN" in perhaps the most lovably cheesy way possible.

Cumberbatch's Harrison, quite the scene-stealer in sequences that let him monologue, won't fool fans who have probably already either guessed or read about who he really is, but for casual viewers, the twist should prove interesting enough. Without revealing too much, a good helping of "Into Darkness" feels like a spiritual partner to the aforementioned "Wrath of Khan," in which the latter film's villain (Richard Montalban) seeks revenge on Kirk for sending him and his super-human crew to a desolate planet in a past episode of the TV series. "Into Darkness" borrows moments, feelings, and emotions from that film, yet still exists a great deal removed in terms of style, thanks to Abrams and Co. Yet, some of the parallels are a bit too on-the-nose – at their most extreme existing as literal mirror reflections of scenes from "Wrath."

"Into Darkness" is also a rather loud film, relying on prior knowledge of these characters from the 2009 film and focusing more on its nonetheless impressive effects and action sequences. Even some of the film's quieter moments are violently disrupted by the Enterprise getting slammed around and blasted through space. For what it's worth, this roller coaster ride could've been a tad less bumpy.

Luckily, none of these things derail the fun to be had by "Into Darkness," a solid sci-fi blockbuster by any standards. Some of its more obvious tributes and major changes may still cause a stir in diehard fan communities, but for a casual appreciator of the franchise and as someone who really only began to appreciate the beauty in the old material after seeing the 2009 film, I was entertained. And so should be those Trek newbies on the opposite end of the spectrum, even if they still can't tell an android from a Vulcan.