Safe Kids Erie Lives Up to its Name

Local safety coalition is hoping to reach a goal of 15,000 'likes' on Facebook ... wanna help it get there? 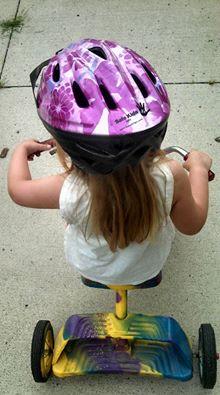 To think we almost let that morning's heavy rains keep us from our usual Monday-morning hike to the library a couple of weeks back.

But, seeing a break in the clouds, my three-year-old and I decided to go -- raining or not -- because trekking to story-time at the Edinboro branch of the Erie County Public Library is something we do every week.

Once we got there, we were greeted by a buzz of activity, and a whole bunch of little kids running about, playing around -- and wearing shiny-new, funky-fresh bike helmets.

Before long, my little girl had been fitted, by a local safety pro no less, with one of her own.

"It's pink," she said, happily sporting her new gear. "It's got flowers on it."

She's since taken to wearing it (as a fashion statement, with a superhero cape) here and there for extended periods of time, which we as parents don't mind.

Yunno, safety and all.

And that's the whole goal of the helmet-givers, Lake Erie College of Osteopathic Medicine-led non-profit Safe Kids Erie, which, according to its stated mission, "provides dedicated and caring staff, operation support and other resources to assist in achieving our common goal: keeping your kids safe."

The Safe Kids coalition, led by director Patty Puline, also works to implement a range of other local programs -- stuff like sports clinics and car-seat checkups, as well as automobile, swimming and household safety workshops -- that can help parents and caregivers prevent childhood injuries and deaths.

And now, according to Puline, Safe Kids is hoping to reach a goal of 15,000 'likes' on its official Facebook page, which she says could put it in the running for a host of local, state and national grants and awards, all of which would be used to further the Safe Kids mission, and possibly even develop new safety technologies locally.

"If we could save even one life, it would be worth it," she said.