Salam Neighbor Sets Up Shop at a Syrian Refugee Camp

Zach Ingrasci and Chris Temple's 2016 documentary takes us to the deserts of Jordan. 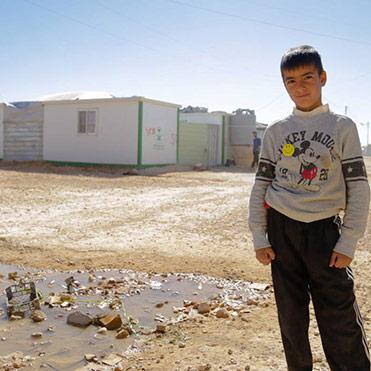 To provide an intimate glimpse of day-to-day life in a Syrian refugee camp, filmmakers Zach Ingrasci and Chris Temple did something perfectly obvious but strangely unexpected – they moved in.

Their 2016 documentary Salam Neighbor (which means "hello neighbor") takes us to the deserts of Jordan, where thousands of Syrians have resettled at a place called Za'atari. Since the UN had never allowed a film crew to settle down in a camp like this before, there were plenty of logistics to work out. But Temple and Ingrasci – whose previous film found them trying to survive on a dollar a day in Guatemala – soon learned to hang out, share tea, and play cards with their neighbors.

In an election year marked by plenty of chest-thumping about the potential dangers of displaced people, Salam Neighbor offers a timely breath of fresh air.

They decided to focus their efforts on five refugees whose lives were disrupted by the five-year conflict in their homeland – a 10-year-old boy suffering from PTSD, a grieving grandmother, a 30-something relief worker, a nurse, and an aspiring French teacher. As it shares their stories, the film also pulls back a bit to assess the scale of the crisis – approximately 1.4 million Syrians had fled to Jordan at the time it was filmed.

The Syrian civil war is a thorny and complicated affair, with plenty of competing regional adversaries. And the American media has done a pretty poor job of providing context, let alone a sense of the human scale of the conflict. In an election year marked by plenty of chest-thumping about the potential dangers of displaced people, Salam Neighbor offers a timely breath of fresh air. – Dan Schank