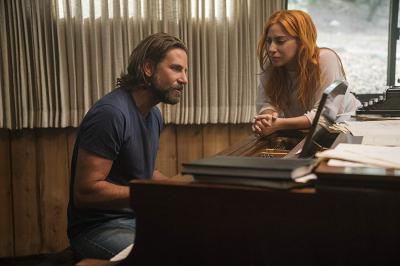 How do you take a universally familiar story and turn it into something that can still surprise audiences? This is the task that befell Bradley Cooper with his directorial debut, the third(!) remake of A Star is Born and his solution is some energetic filmmaking (which doesn't always work to the film's advantage) combined with inspired songwriting and two extraordinary performances.

Cooper plays Jackson Maine, an aging, alcoholic country star who by chance meets a struggling singer named Ally (Lady Gaga). As the two fall in love, Jackson coaxes her into the spotlight but as Ally's career begins to skyrocket, Jackson's inner demons begin to take hold of him.

Being the fourth time this particular tale has been told, it goes without saying that the story is nothing new. If you've seen any film about a young star's sudden rise to fame combined with a whirlwind romance, you'll know where this film is going. Also, Cooper's inexperience as a director sometimes shows with some unmotivated camera movements and occasionally jarring editing choices. That being said, the two stars are the real highlights of the film. Cooper and Lady Gaga give powerful, emotional performances and it's an understatement to say that they're both incredible singers. Last but certainly not least, the film is filled with some very well-written songs and when the singing starts, that's when the film really comes alive. The terrific musical numbers and strong acting definitely make A Star is Born worth a watch. — Forest Taylor