It's exactly what you think it is 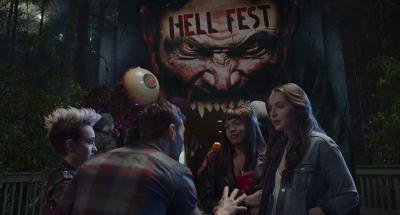 October is here and to celebrate the encroaching Halloween season, it's always fun to see some new horror movies in the theater. Naturally, when I saw the trailers for Hell Fest, a good old-fashioned slasher flick, I thought it would be the perfect October night out. The film was what I expected: a good old-fashioned slasher flick, but I think it could have been more.

The film follows a group of college students spending a night in an extreme horror theme park. This park boasts some of the most intense haunted mazes that thrill-seekers could hope to find. However, when a masked killer begins murdering patrons of the park for real, our heroes learn that they're getting far more than they expected.

The film has all the ingredients of a typical slasher: a masked maniac, a terrified group of young people, and plenty of gory kills. That being said, it almost accidentally moves into more interesting territory halfway through when the characters aren't sure if what they're seeing is real, or it's just their friends and some mischievous park workers playing pranks on them. It could have been a clever combination of April Fools Day and The Funhouse, but because we get to see the killings in all their grisly detail, any mystery is instantly lost on the audience. The filmmakers are so concerned with giving the audience all the gross thrills they can offer and as a result, Hell Fest becomes forgettably routine when it could have been something a little more clever. — Forest Taylor