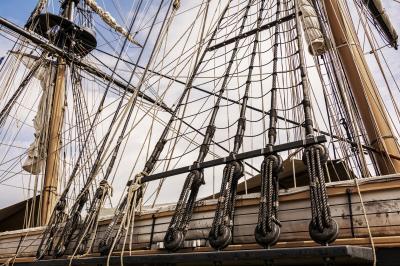 The legacy of Oliver Hazard Perry and the U.S. Brig *Niagara is virtually without rival in Northwestern Pennsylvania. The Erie Commodores play soccer not far from Perry Square, the *Niagara welcomes visitors to the Erie Maritime Museum, Perry Monument sits on Presque Isle, and Perry's "Don't Give Up the Ship" flag could be seen as the unofficial symbol of the region. Yet, what is rarely told are the stories of the ordinary people who made it all happen. Who are they? Where did they come from? Did they stay in the area? Are their families still here? The individuals who came to Erie in the 1810s laid the foundation for many families, some of whom remain. Their stories are just as captivating and critical to the construction of Western Pennsylvania as Perry's.

Preparations for the Battle of Lake Erie during the War of 1812 brought hundreds of young men to the port in the middle of the wilderness at Erie. Shipbuilder Noah Brown and Daniel Dobbins (Erie public dock namesake) completed building Commodore Oliver Hazard Perry's squadron at Presque Isle Bay by spring of 1813. Meanwhile, a young Samuel McKinney, the son of a Revolutionary War veteran and Irish immigrant, made his way from his current home in Centre County to the shores of Lake Erie.

Born in Chester County on Halloween 1786, there was nothing remarkable about the 27-year-old from the Pennsylvania countryside. In July of 1813, he enlisted into the 147th Pennsylvania Regiment and was thus assigned to Captain George Records' company, which was to guard the Navy Yard at Erie during the War of 1812. Upon reaching Erie, however, he decided to volunteer for naval action and eventually found himself on Perry's relief flagship, the U.S. Brig *Niagara, as a private during the Battle of Lake Erie on September 10, 1813.

According to the list of prize money, McKinney was awarded $214.89 at the conclusion of the war. Prize money included the value of all captured ships and their contents and then, if applied for by the recipient, apportioned appropriately based on rank.

After the war, Samuel moved back to Centre County and married his wife Rachel in May of 1816. The pair and their kids lived in the Bellefonte area of the Nittany Valley until 1833 when he moved his family, now including 12 children, west to Venango County. He had passed through the region on his way home from the war and fell in love with it.

One of the founders and first permanent settlers of Salem City, Cranberry Township, Venango County, Samuel would unassumingly spend the remainder of his impressively long life living on the 200-acre farm he had purchased there. In 1871 he applied for and was granted a veteran's pension of $8.00 a month, but died a few months later on September 20, 1871. At the age of 85, he was one of the last remaining Pennsylvanians to have fought in the War of 1812. His wife Rachel, much younger than him, died in February of 1895. The two are interred in Brandon Cemetery on Salina Road between Seneca and Cranberry in Venango County, and their deteriorating headstones are viewable toward the northeast corner of the property.

Other members of the McKinney family made their own marks within the community that would become the Oil Valley. Samuel's wife Rachel, along with the Brandon family, the namesake of the cemetery, took part in founding the Cranberry Cumberland Presbyterian Church in October of 1837. One of McKinney's sons, Samuel H., though a farmer by trade, was well-educated at the Franklin Academy and held several public offices over his lifetime including township clerk and Venango County commissioner. 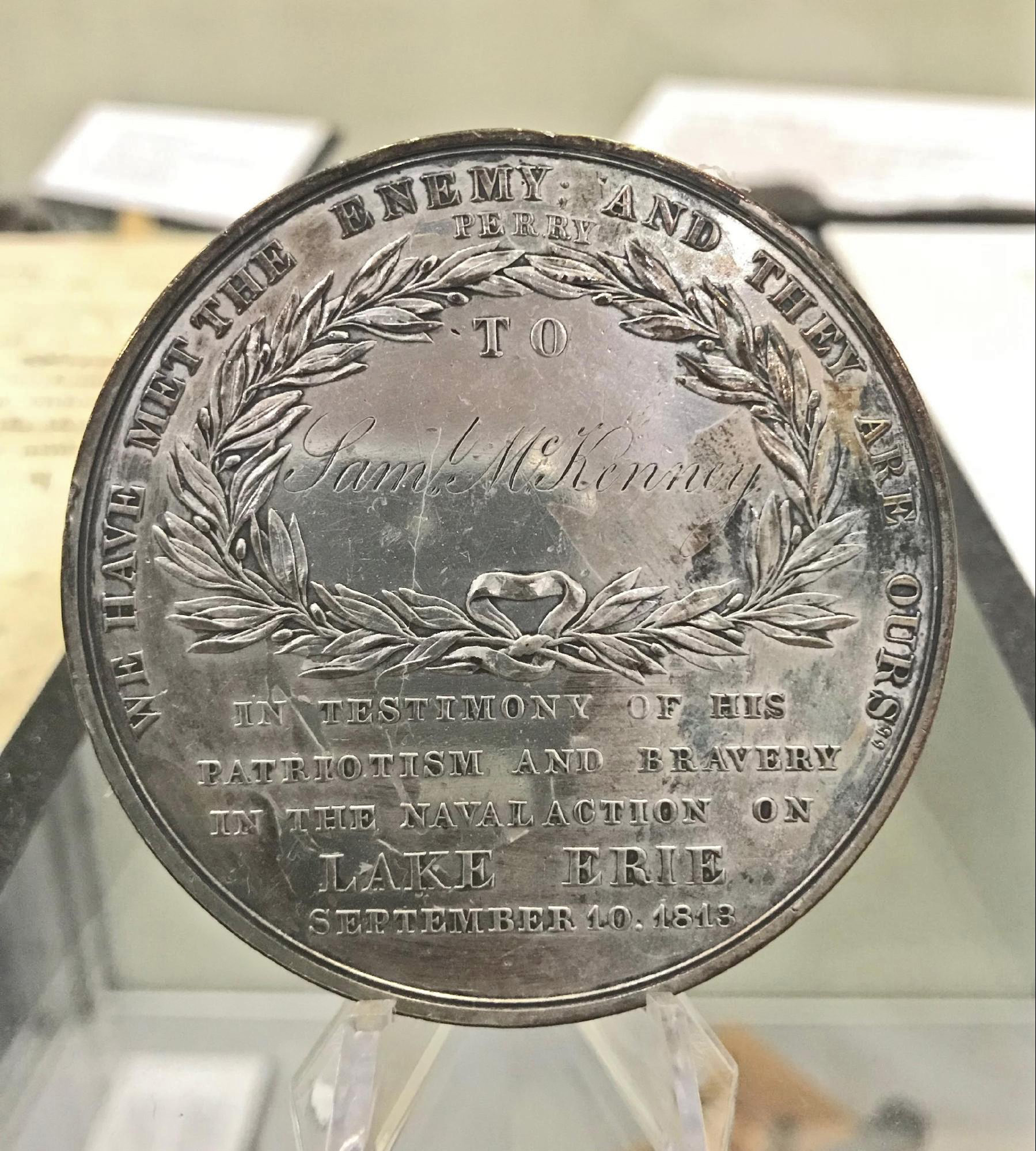 Samuel McKinney's silver medal awarded by the state of Pennsylvania, on display at the Erie Maritime Museum

In 1819, Samuel applied for and received a silver medal awarded by the state legislature of Pennsylvania, for "the noble and gallant manner [he] volunteered on board the American squadron on Lake Erie under the command of the illustrious Perry". Designed by renowned die engraver Moritz Fürst and minted in Philadelphia from what at the time was $2 worth of silver (now over $90), it was the first veterans medal ever awarded by a state and required the recipient to be a Pennsylvania native and a volunteer during the Battle of Lake Erie. The medals were only awarded to volunteers, meaning professional navy and military were not eligible. Measuring just larger than two inches in diameter, the medal bears the portrait of Commodore Oliver Hazard Perry on one face, and the engraved name of the recipient (in this case Samuel McKinney,) as well as the inscription "In Testimony of His Patriotism and Bravery in the Naval Action of Lake Erie September 10, 1813" on the other.

Samuel's medal was donated to the Erie Maritime Museum by John H. McKinney on behalf of the entire McKinney family and his descendants in 2004. The medal and a facsimile of the letter that accompanied remains on display. It is estimated that only a few dozen medals were awarded, but due to insufficient documentation, a true number may never be known. McKinney's thank you letter hand-written by Governor William Findlay is the only one known to exist. His name is also listed on the bronze plaques near the present-day *Niagara indicating the original crew from the Battle of Lake Erie.

A few McKinney family members remain in the Lowville-Wattsburg area. Other known descendants include John I. Baird of Butler, whose father, Ivan H. Baird, was Samuel's great grandson, and John's daughter Jacquelyn Baird of Erie, who played an active and generous role in the compilation of this article.

Regular people like Samuel McKinney built not only Western Pennsylvania, but also helped shape the United States into what it is today. Thousands of soldiers would go on from the war to create lives for themselves and establish the roots of families that still survive today. The stories of those are often lost to history. If your family has a story comparable to Samuel's, the Erie Maritime Museum and Flagship Niagara League would be honored to hear it. Their contributions to the region and country merit recounting and illustrate a more accurate and complete depiction of the past.