Shows begin at 5:30 p.m. at Beach 1 and continue until that large fiery ball in the sky sinks below the lake on the horizon. 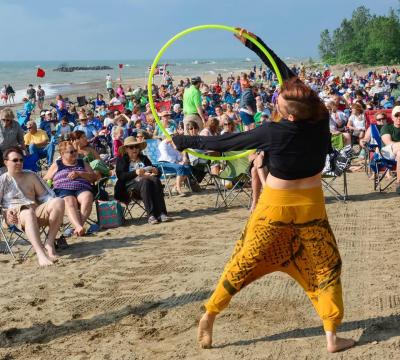 It can be universally noted that Erie residents are starting to feel skeptical that summer — or even warmer weather — will actually return. Surprisingly, however, the UPMC Sunset Music Series is starting soon, and will run every Wednesday from June 5 to July 17 (except July 3). Shows begin at 5:30 p.m. at Beach 1 and continue until that large fiery ball in the sky sinks below the lake on the horizon.

"We are anticipating a summer of awesome music and delicious food — all with the irreplaceable sunsets of Lake Erie as a backdrop," says Jon DeMarco, executive director of Presque Isle Partnership. And this year, it seems that the Sunset Music Series will be bigger and better than ever.

If that's not enough to whet your appetite for some great summer fun, your mouth will be watering at the food truck lineup which will also be stationed at the beach for your masticating pleasure. The rotating roster of edible delights will feature Erie's finest food trucks, which, if you know anything about these mobile culinary units, range from vegan food to barbecue, and tacos to Indian fare. Connie's Ice Cream and J's Mainstreet — serving up hot dogs and ice cream — will be there each Wednesday.

"The UPMC Sunset Music Series is a perfect opportunity for the Erie community to experience our local musical talent along with Presque Isle's world-class sunsets and Lake Erie's beautiful shores," says DeMarco.

Speaking of music, each week, expect to indulge not only in summer delights, but seasonal treats of the aural variety. Two bands will play at every event, as follows:

The Goats — Veteran local musicians with a broad repertoire from country to jazz and everything in between.

SIRSY — Charismatic and sassy sounds that will get everyone dancing, peppered with anecdotes guaranteed to prompt a laugh or two.

July 10: Six Year Stretch — Soulful, infectious melodies that will get you up and grooving.