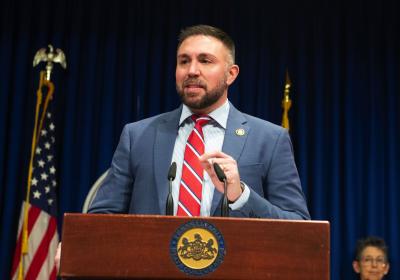 This past July, the Republican-controlled legislature passed SB 106, which contained a hodgepodge of potential amendments to Pennsylvania's constitution. The proposed amendments include issues from voter ID requirements to how lieutenant governors are chosen. Most notable is the proposal to change to the constitution to explicitly say that there is no constitutional right to an abortion in Pennsylvania. The passage of this language would legally clear the way for abortion opponents to ban the practice even in cases of rape, incest, or to protect the life of the mother. If the Republicans hold control of both houses of the legislature after the November elections, SB 106 will come up for another vote and if passed, the measure would go to the voters, probably next May.

I voted against SB 106 for several reasons that have to do with the content of the bill, but I also oppose the process by which our constitution is amended. First, my problems with the bill itself: With the Supreme Court's Dobbs decision, the issue of abortion is playing a prominent role in elections across the country. We have all heard the nightmarish stories in the news about child rape victims being denied by certain states the ability to terminate a pregnancy and having to flee across state lines for the procedure. I don't want that situation to ever happen in Pennsylvania. I believe the extreme position that would deny a girl or woman the ability to access abortion in the case of rape, incest, or their lives being threatened is wrong. If the language of SB 106 is enacted, it will open the doors for the extremists on this issue to ban abortion in the commonwealth without any exceptions. I should know, because my opponent this fall shares these extreme views and, as we saw in other states, when extremists have the ability to deny abortion services to everybody, they will.

I also believe the way the constitution is amended in Pennsylvania has to change. Presently, it takes both houses of the General Assembly to pass an amendment in consecutive legislative sessions by simple majority. After that, the proposed changes go to the voters. This is a much lower hurdle to clear than amending the U.S. Constitution. To amend nationally, both the House and the Senate require a two-thirds majority to pass an amendment, which then goes to the states for ratification. It takes three-fourths of the states to agree to the change. The federal system was set up in a manner that requires a veto-proof majority in Congress to kickstart the process. In Pennsylvania, the mere majority vote necessary in the General Assembly allows for the potential for unpopular policies to be sent to the voters. Furthermore, the date selected for the public to vote on these significant changes can be manipulated to fall on low turnout election days. There is talk in Harrisburg that the Republicans will look to a May 2023 date to put SB 106 to the voters. Republicans pretend that they want to give all of Pennsylvania the opportunity to weigh in, but the reality is they deliberately schedule this for low turnout primary elections when only a very small, partisan percentage of Pennsylvanians are voting.

To combat this, I am the prime sponsor of HB 2340, which would require a two-thirds majority in each chamber of our General Assembly to send a proposed constitutional amendment to the voters. I strongly believe this bill, if enacted, will allow for more thoughtful and diverse consideration of proposed changes to our state constitution. It also puts up a roadblock for those cynical politicians who would look to jam significant constitutional changes without serious debate and by scheduling a statewide vote in a low-turnout, off-year primary election day. These are the reasons I oppose SB 106 and am working on changing how we amend our constitution.

Ryan Bizzarro has represented Pennsylvania's 3rd Legislative District since 2013. He can be reached at PAHouse.com/3/contact