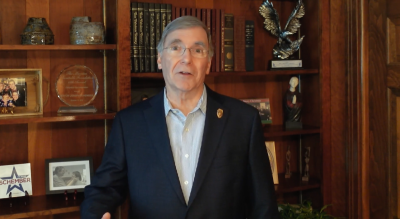 In 2017, Joseph Schember expressed his intention to serve three terms as City of Erie mayor, stating his ultimate goals of building opportunity, restoring hope, and transforming Erie. First, though, he must earn a second term by advancing to and winning November's general municipal election.

So far, there is no opposition from any fellow Democrat nor any Republican, as no other candidates have come forward. Despite that, the current Erie mayor earnestly pleaded his case in a video addressing the electorate on Tuesday morning.

"Despite the pandemic, despite the societal issues, and despite the financial challenges facing the city, my administration has made significant progress in positioning Erie for a more prosperous future … in my first three-plus years, I have remained open, honest, transparent, and accessible, and that will continue as long as I am mayor."

Among the accomplishments he asked Erieites to consider were $85 million in new commercial and residential investments through the Local Economic Revitalization Tax Assistance (LERTA) program, support of the Erie Downtown Development Corporation's efforts in the area of Perry Square, bayfront developments, and a 30 percent increase in minority hirings within Public Works Department. Meanwhile, he urged patience as his administration continues to tackle the issue of systemic racism.

"If I accomplish nothing else as mayor, I want every person in Erie to be valued for their unique talents and skills, regardless of their ethnicity, religion, gender, age, race or color of skin," Schember said.

Before serving as mayor, Schember occupied the role of vice president at PNC Bank and chaired the Finance Committee on Erie City Council, where he was a member for 5½ years.

"I am proud to live in Erie," Schember said. "I enjoy every day, every meeting, and every conversation. I'll continue to do everything in my power to transform Erie."