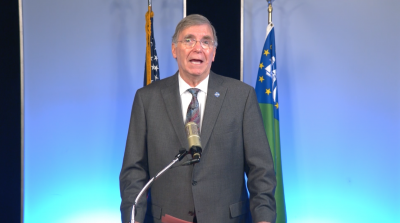 Erie Mayor Joseph Schember hosted a State of the City Address on Feb. 4. The event was live-streamed through the City of Erie YouTube channel.

Schember commented on the novel coronavirus, stating that "we all miss the personal interaction we enjoyed so much previously, but we learned how much more efficient we can be with virtual meetings."

Schember moved onto the ongoing Activating Our Vision Plan which was revealed in Jan. and promises to "Build Opportunity, Restore Hope, Transform Erie" through its mission statement. "This document presents 26 specific, measurable, key performance indicators. This is how we are measuring our progress in realizing our vision," said Schember. "My team and I set 21 of these key performance indicators, which we hope to achieve by the end of 2021." The other five, Schember said, were created by the Erie School District and the Erie Regional Chamber of Commerce and have sights set on being achieved by 2024. Schember then discussed some of those 26 points, including hiring 26% minorities for new non-bargaining positions, increasing the minority participation in police and fire department's written and physical exams to 15% and to achieve minority representation on commissions and authorities boards to 26%.

Also included in the State of the City Address were other Key Performance Indicator (KPI) goals concerning "welcoming and vibrant neighborhoods," Bayfront Parkway Central Corridor Improvements, the Erie School District, funding and approval for the proposed Community College in Downtown Erie, job growth, increase in per capita income, increase percentage of those living and working in Erie, and identify 25 acres of manufacturing property for redevelopment.