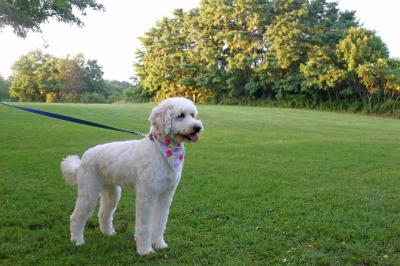 The good people of Erie love their dogs. They love them even as they take up a significant portion of their beds and bark at all hours; they love their friends' and neighbors' dogs; and they love all the dogs that aren't necessarily part of their lives, like when Ultimate Good Boy corgi Waffles went missing on PI in the coldest weather of the year and was miraculously found alive and well, 60 hours later.

Happy dogs need exercise and socialization, and Erie offers tons of locations to which doting pet owners can bring their waggy-tailed friends — far beyond the myriad attractions at Presque Isle State Park.

Here are some of the best Erie spots for putting a grin on Spot's perfect, furry face.

With shady, wooded trails, a creek for hot-weather splashing and a beautiful expanse of gently sloping grassy lawn as you drive into the park proper, McClelland Park is a gem on the east side.

One of the best things about this park is that it is just as fun in the winter. Though excessive snow and/or ice can lead the city to block its hilled entrance off, patrons can still park on 26th and walk up and back into the recreational space; often, the foot traffic has left considerably packed-down snow trails to follow, with four-legged paw prints criss-crossing erratically, as dogs are wont to practically leap around in their excitement at a new adventure.

The Larry R. Fabrizi Dog Park opened to great fanfare on July 22, 2015 as the first city-owned dog park, and patrons were immediately wowed by the expansive, beautiful space. The planners and organizers clearly put a ton of thought into the park, including not just training/obedience equipment for the pups, but tons of seating for their human tagalongs.

The fenced areas are divided between space for dogs over 35 lbs. and dogs under that weight (though these guidelines aren't necessarily set in stone), plus ample leashing sections to discourage escape artists. One word of caution: the Fabrizi Dog Park does not have a drinking water source, so you should bring a jug of cold water and a dish for your buddy, especially on hot summer days.

Frontier Park, nestled between West Sixth and Eighth streets and the Bayfront Parkway, is like Erie's Central Park, and it is a fantastic spot for taking Spot to get some exercise — and some sniffs, and a swim, too. Rather than give the illusion that you have left the city, Frontier often pulses with the same energy and excitement as the downtown area, just on a smaller and leafier scale.

If you have a new puppy to show off and socialize, your dog likes splashing around in a creek, or your pooch simply loves meeting new people and new four-legged friends, Frontier is the busy, on-leash place to see and be seen, especially this time of year.

Like the equally talented (but much lesser-known) little sister of an established celebrity icon, Scott Park is situated mere feet away from the opening of Presque Isle, and while it boasts no beaches, it is a dog-friendly delight in its own right.

Its trails are wide and easy-going (for the most part), plunging you into woods that make you feel as though you have left the city, until you keep walking and come across the outskirts of Sara's Campground. The northernmost portion of the trail leads you along a bluff that overlooks part of Lake Erie, a peaceful and contemplative sight. Just time your visit for dry weather, as the dirt trails can get muddy after rain.

Like so many of the dog-friendly parks and trails in our area, Brown's Farm gives the impressive illusion of being far out in the country, while the general area includes numerous housing developments and two Millcreek schools. Yet for all that, when you enter the Brown's Farm trails, just a quick drive down 832, it feels as though you are leaving all of it far, far behind.

The trails themselves are grassy and extraordinarily wide — lots of ground to cover for devoted sniffers — with tall vegetation on either side that hums with the activity of busy insects. Further back, as you move toward Walnut Creek, things get a bit narrower and steeper, providing more rugged fare for a greater challenge — all the better to burn off that endless energy some of our furry friends always seem to have.

Despite the ubiquity of the Erie Humane Society on the pet adoption scene, few people realize they do, in fact, have a dog park behind the main building on Interchange Road, and if you come on a good night, it is a pretty happening place to be.

Though it is smaller than Fabrizi Park on the other side of town, there is still plenty of room for play, with two separate fenced pens, each with their own leashing section. The larger side has some training equipment, plus a "back door" from the pen, giving dogs and their owners easier access to Walnut Creek, which meanders behind the park.

Another great bonus at the Humane Society facility is that there is access to running water, and if you forget a dish, there are a few typically lying around; all they need is a quick rinse.

And if you are lucky, you might get to meet the most famous and beloved of all Humane Society Park patrons: owner Tom and his round-eyed, long-eared basset Oliver, who sometimes visit multiple times throughout the day.

A few other wonderful dog-friendly spots in the area:

If you were looking to contact Cara Suppa, you'd be barking up the right tree with csuppa@eriereader.com