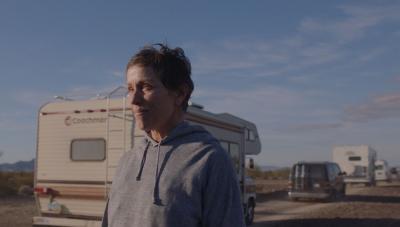 Chloe Zhao (Songs My Brothers Taught Me, The Rider) has already made an impact in her young career with simple, humanistic stories set in America's heartland. Her latest film Nomadland continues that tradition. But while her previous films are populated entirely by nonprofessional actors, this story is elevated by a veteran actor giving quite possibly her best performance to date. The result is a powerful journey through a fascinating subculture.

Fern (Frances McDormand) is a woman in her sixties still feeling the emotional scars of her husband's death. When the Great Recession causes her hometown to literally disappear, Fern packs her van and sets off across the Midwest as a modern-day "nomad." We follow her and others as they travel throughout an America that many may find unfamiliar.

Much like Zhao's other films, most of the cast are nonprofessionals who actually live this lifestyle (in this case, real-life nomads traveling across the country). However, their authentic but awkward performances are grounded by McDormand's presence. She can deliver more emotion with a nod of the head and a half-hearted smile than other actors could with their entire bodies. Also, the film is content with just existing with these people and their situations rather than psychoanalyzing them or worse, putting their lives into some kind of "bootstraps" narrative (I'm looking at you, Hillbilly Elegy). The lack of narrative makes this primarily a film about people rather than ideas, and that just makes the ideas that it may stir up all the more impactful.