Sensory Overload: 'Alita: Battle Angel' is Beautiful, but a Little too Crowded 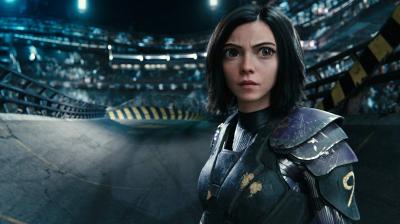 We are living in what I like to call a "post-special effects" film world. Visual effects have advanced so far that filmmakers can now create worlds and characters that have heretofore only been possible in novels or comic books. The only problem is that it makes it much harder for these amazing effects to really dazzle an audience. Robert Rodriguez's new film Alita: Battle Angel, based on a classic manga series (and from an idea that James Cameron had been working on for over 15 years), is that dazzling experience. It's a gorgeous film with so much life and activity packed into its runtime ... perhaps a little too much.

Set in the 26th century in a horrifically class-segregated world, the film follows Dr. Dyson Ido (a perfectly cast Christoph Waltz) who finds an abandoned cyborg left on a junk heap, repairs her, and names her Alita (Rosa Salazar). With no memory of who she is, Alita and Ido soon find themselves drawing the attention of bounty hunters and an evil businessman (Oscar winner Mahershala Ali) who want Alita for her thought-lost technology.

As I said before, the film is visually spectacular, giving us a world that is alien but not so alien that audiences can't relate to it. It is also loaded with incredible action set pieces that whiz us through the film's complex narrative. The writing is sometimes melodramatic and the acting often features heavy emotion and over-the-top physicality. Films based on anime are usually like that, but unfamiliar audiences may find it to be all too much. Alita is always in a rush and some people may have trouble keeping up. — Forest Taylor