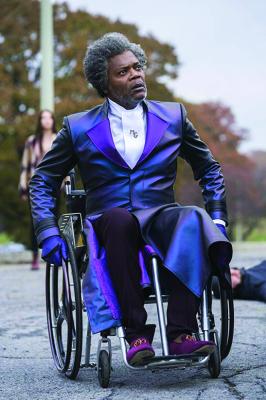 No filmmaker has had more of a roller-coaster career than M. Night Shyamalan. After hitting it big with critics and audiences, he went on to make some truly bizarre films that ranged from ambitious failures (The Village) to hilariously inept (The Happening). Shyamalan has found something of a comeback recently with Blumhouse Studios, making smaller scale thrillers culminating with his newest film, Glass. It is solidly a Shyamalan story; that is to say it is ambitious, uneven, and often more than a little dumb.

A sequel to both 2000's Unbreakable (still the director's best) and 2017's Split, the film begins with David Dunn (Bruce Willis) tracking down seemingly supernatural serial killer Kevin Wendell Crumb (James McAvoy) to an abandoned factory. During their fight, they are both apprehended and taken to a psychiatric hospital where the notorious Elijah Price (Samuel L. Jackson) has been kept all these years. Upon seeing what Crumb is capable of, Price plans to use him for more supervillain schemes.

The film initially asks some really intriguing questions about the myth of the superhero in our culture and how powerless people may use them as a vicarious power fantasy. Unfortunately, that's all a preamble to the film's true goal: silly theatrics and a plot that violates Unbreakable's entire premise. I can't talk about some of these problems without spoiling major parts of the film, but the story takes a left turn so jarring, it ruins everything else the film had going for it. As the eponymous Mr. Glass intones: "This is real life, not a cartoon." If that's the case, why does Glass insist on being so cartoonish? — Forest Taylor