Shakespeare Summer Nights Takes the Bard to the Park

The amphitheater at the Lake Erie Arboretum in Frontier Park will host the seasonal series, as this year's Shakespeare outing will feature a pair of famous Shakespearian duos: Romeo and Juliet and Rosencrantz and Guildenstern.

by Alex Bieler
View ProfileFacebookTwitterInstagramGoogle+RSS Feed
July 9, 2014 at 6:35 AM 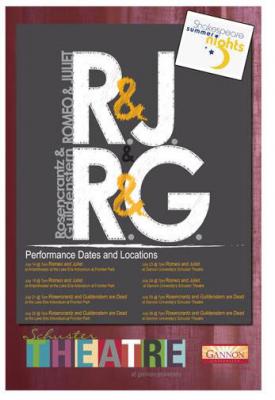 For the eleventh consecutive year, Gannon University's Schuster Theatre will put on Shakespeare Summer Nights, providing you a chance to enjoy The Bard and a breeze.

The amphitheater at the Lake Erie Arboretum in Frontier Park will host the seasonal series, as this year's Shakespeare outing will feature a pair of famous Shakespearian duos: Romeo and Juliet and Rosencrantz and Guildenstern. In fact, Romeo and Juliet marks the first time that a show will be repeated from a previous year, although the iconic play is a popular production for a reason.

"I'm fascinated with the fact there are these two people and they ignore all of the rules in this society, because the minute they look at each other, they can't look away," The Rev Shawn Clerkin, director of Romeo and Juliet says during a cast dinner at his home. "They just can't. I'm really caught by that passion."

Still, The Rev. Shawn Clerkin ensures that there will be a twist for fans of the classic play. While two actors will reprise the titular roles, two others will be called upon to play every other character in the production.

"It's almost like they are the vehicles that drive us and our plot," says Erika Krenn, who plays Juliet in the production. "They're just as necessary as we are, but it's still a story about two lovers."

Unlike Rosencrantz and Guldenstern, you can decide your own entertainment fate and head down to the Lake Erie Arboretum for some Shakespeare in the sun, a pair of shows to suit your classical tastes. – Alex Bieler