Shop small Saturday may be behind us but there's work to be done in the name of local business. 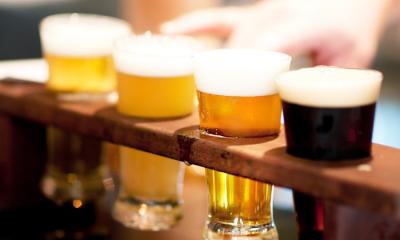 The Saturday after Thanksgiving has become known as "Small Business Saturday" or "Shop Small Saturday." It's an effort to get consumers away from big box chains that dominate Black Friday and, for worse or worser, Thanksgiving night.

Shop small is a great campaign. It encourages consumers to spend money that stays in their communities, impacts local businesses and business owners, and might even encourage some optimistic entrepreneur to invest in establishing the small business they always wanted to have.

Now that Thanksgiving is behind us and the holiday season is in full swing it's time to continue the promotion by perpetuating one of Erie's strongest attributes: its community of craft brewers.

It's no secret that Erie enjoys adult beverages. As a result, it's more than capable of supporting the local alcohol production scene. From wine to beer and even whiskey, the region boasts some of the best breweries and wineries in the Commonwealth.

So here's a proposition for the holiday season (if you're not already partaking): drink local and share the love with others who may not be in the know. It's good for the economy and good for the soul of the community.

Communities in Boston, Massachusetts;  Richmond, Indiana; and Danville, Virginia have capitalized on those locations' historic manufacturing culture and their love of beer to revitalize neighborhoods and towns.

The Erie region is on the precipice of such a turn.

Brewing is a legacy industry in Erie. Brewing was at its peak in the late nineteenth and early twentieth centuries, but waned throughout the twentieth century in a perfect storm of business degradation that resulted from local environmental pollution and the rise of national distribution by the big box brands that are now fighting to stay relevant in the craft brewing revolution.

In early November, Bruce Katz, vice president of the Brookings Institution, reminded us that our metropolitan revolution should be tied to our legacy of manufacturing. He didn't specify a product. Perhaps our future resides at the bottom of pint glass.

So as you hit the streets looking for local shops to give local flair this holiday season, stop by your favorite watering hole and have the bartender pull a local tap in the name of shopping small and drinking local.

And fear not. There's a big lake out there. They'll brew more.