Signals Midwest grace the stage of Basement Transmissions again, but at its new location.

by Nick Warren
View ProfileTwitterInstagramRSS Feed
May 10, 2017 at 1:00 PM 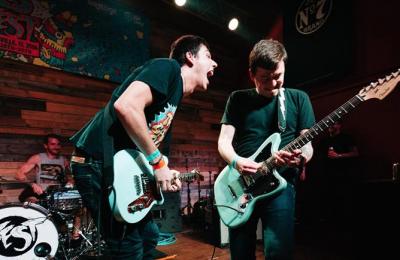 Cleveland punk band Signals Midwest have long been a treasure just across the Ohio border. In September, the band released their fourth album. On Tiny Engines Records, they're label mates with bands like Wild Pink and The Hotelier. They've toured almost nonstop for years, and are staples of The FEST in Gainesville, Florida. Most recently, they were joined on tour with the London band Great Cynics. Throughout their career, they've also been favorites of the seminal review site Punknews.org, with all of their albums receiving the "Best New Music" distinction.

When you listen to them, you quickly understand why.

Their songs have recurring themes of nostalgia and introspection. They employ singalong choruses so catchy they'll be in your head for weeks.

Fronted by songwriter Max Stern, the band plays a melodic blend of punk rock and indie rock. Their songs have recurring themes of nostalgia and introspection. They employ singalong choruses so catchy they'll be in your head for weeks.

Sometimes it makes me you wonder why more artists from Cleveland, Pittsburgh, or Buffalo neglect to stop over in Erie. Signals are no strangers to Erie, however, having graced the stage of Basement Transmissions, but at the venue's former State Street location back in 2013.

The band will be joined by a fine collection of Erie artists. Opening up the show will be The Cartwrights, comprised of singer Chris Cherry, guitarist Jason Pintea, bassist John Molnar, and drummer Pat Bolla. They have an impressive, energetic sound similar to the headliner's. Following The Cartwrights will be Flora, a local dream pop band led by McKenzie Sprague, better known as Optimistic Apocalypse. Sprague's songs are hauntingly beautiful, and amplified further with the full band to back her up. The third act will be Archway, who recently completed a tour that took them all the way to the Rocky Mountains. Playing a potent style of emotional pop punk, they promise to bring a fantastic show, with every band adding something new. – Nick Warren