Few bands do more with less than this pair from Albany, N.Y. 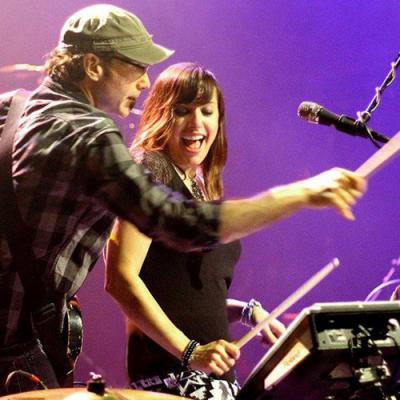 In light of recent events, locals might not be inclined to favor a "downsized approach," much less dance about it. Rock quartet-turned-duo Sirsy may sway the public sentiment, however, when they headline at the Kings Rook Club.

Since streamlining operations in the mid-2000's, Sirsy's Krahmer and Libutti have split bass duties, employing whatever limb or extremity they've not already committed to their primary instruments.

Few bands do more with less than this pair from Albany, N.Y. Despite being stuck behind the drums, singer (and occasional flutist) Melanie Krahmer sacrifices little in the charisma or stage presence departments. She plays her kit standing up, front-and-center beside the band's other half, guitarist Richard Libutti, as she unleashes her sultry vocals (something akin to Bonnie Raitt, Grace Potter, and Alison Moshart of The Kills/The Dead Weather). Since streamlining operations in the mid-2000's, Krahmer and Libutti have split bass duties, employing whatever limb or extremity they've not already committed to their primary instruments.

The duo balances pop accessibility and blues-rock grit adroitly on their latest offering, 2013's Coming Into Frame, produced by the Grammy-winning team of Paul Kolderie and Sean Slade (who have worked with Radiohead, the Pixies, Hole, Dinosaur Jr., the Mighty Mighty Bosstones, etc.). Combine that with their tireless touring schedule (200+ shows a year), Sirsy appears poised for a long-overdue breakthrough.

Opening for them are brothers Andy and Adam Brown of Six Year Stretch with a set of stripped-down alternative/pop-rock. – Matt Swanseger