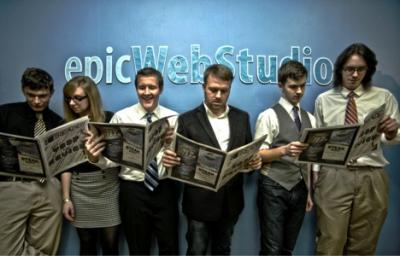 In case you missed it, WQLN's Kim Young interviewed Epic WebStudios' David Hunter on her program "Weekend All Things Erie." Young questioned Hunter, the company's managing partner, about social media and how businesses can use it effectively in today's market, and Hunter talked everything from Facebook to Twitter to newspapers to Iceland and more on the changing face of social media and its relationship to businesses; thus, becoming apparent that social media is more than just a means for learning about what Snooki ate for breakfast and that it isn't just a game the youth are fooling around with.

As an illustration of how social media can drive conversation, Epic's Michael Haas led a live-tweet discussion during the Sunday, March 25 airing of the interview, which featured various members of the community logging on to Twitter to tweet their thoughts as Young and Hunter piped in over the airwaves.

In an email after the broadcast and live-tweet event, Haas, the company's director of social media wrote:

Social Media is such an exciting field to be in because it's incredibly dynamic. And while the message is consistent, the means by which we're delivering it is not. A year ago, hosting a live-tweet like this would have been nearly impossible because no one in Erie was on Twitter! As the only Director of Social Media in the Erie area, I consider educating to be a large portion of my job. I love reaching out to the community, having a conversation with people about what they think social media is, and helping them discover the possibilities that are there for their business/organization. This interview and live-tweet was a perfect example of how we're focusing on prioritizing outreach and encouraging the Erie community to get active online.

Throughout the discussion, various questions were posed and answered in real time—not only by Haas but by numerous other Twitter users engaged in the conversation using the hash tag #ErieSocialMedia—as Young and Hunter continued the interview.

Live-tweeting an event is so exciting...and exhausting. During the event, I barely stopped for more than 2 minutes before I had to start typing again! The constant flood of information from Twitter requires curation and attention to every detail. The end goal -- if done correctly -- is that people everywhere can experience the event that you're tweeting about, even if they're not physically there. Furthermore, live-tweeting facilitates discussion and conversation between everyone. Twitter acts as a whole other level for most events, and it almost always increases the participation.

Live-tweeting allows people to engage in the conversation as it is developing rather than after the fact, which can bring a sense of connectivity through the immediacy Twitter offers. While some of the conversation—both on air and on Twitter—revolved around Erie's reluctance to "get with the times," companies like Epic are helping usher Erie into the new era with live-tweeting and insightful discussions of how social media can benefit businesses, newspapers, and more.

To read the storification of the live-tweet, click here, and then continue the conversation by using the hash tag: #ErieSocialMedia. To hear the interview in its entirety, visit Weekend All Things Erie.