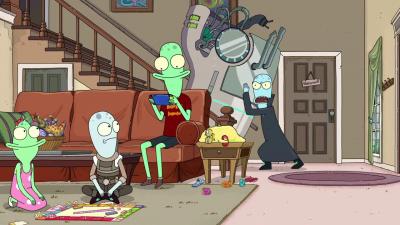 By now, most everyone is at least aware of the nihilistic animated sci-fi series Rick & Morty, but not everyone is enamored with it. Perhaps it's because of offhand references that lead fans to do crazy things like riot over discontinued dipping sauces (specifically McDonald's Mulan Szechuan McNugget sauce), or how a single episode alternates between bathroom humor and questions of existential dread. Rick & Morty co-creator Justin Roiland's new Hulu series Solar Opposites, however, might have a little something for everyone.

Solar Opposites tells the story of a quartet of aliens and their pupa (which can either be a pet or an infant from the look of it) who have crash-landed on earth after their planet was hit by an asteroid. The leader is a genius curmudgeon named Korvo (Roiland) who is obsessed with manuals and repairing their spacecraft. He is often driven up the wall by his overly positive companion Terry (Thomas Middleditch) who absolutely loves the traditions of Earth and wears a different nerdy t-shirt every episode. The younger characters are troublemakers Jesse and Yumyulack, who have shrunk down so many people and put them on display in their bedroom wall that it becomes its own post-apocalyptic subplot.

While the show shares some similarities to Rick & Morty such as animation style, it can very much stand on its own, and should not be considered any sort of follow-up, spin-off, or sequel. It takes the mix of subtle and in-your-face adult humor that Rick & Morty fans like and puts it in the setting of a more traditional American sitcom. Roiland took his version of a family unit like Full House, stranded it in an unfamiliar place like Gilligan's Island, and gave it the sci-fi silliness of Alf. — Claudia Rose