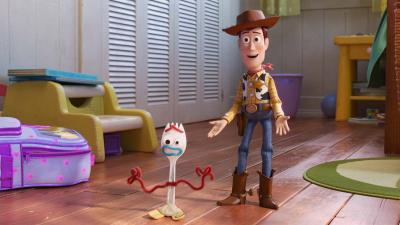 After the clunky but ultimately satisfying finale of Toy Story 3, I was genuinely shocked to hear that Pixar was planning another film in the series. Where would they go after the story of Andy and his toys had been so definitively concluded? A retread of old storylines? Bold new adventures? The dreaded "soft reboot?" The answer to all those questions is "yes" with Toy Story 4: one of the most unnecessary sequels in recent history. With this installment, Pixar's flagship franchise has joined the ranks of Cars 3 and Finding Dory as another series that's perfectly content just treading water.

Now in the possession of young Bonnie, Woody and the gang want to help the girl on her first day of kindergarten. But when Bonnie makes a new toy out of a plastic spork named "Forky", who doesn't accept his new place as a toy, Woody gets into a series of misadventures trying to bring this reluctant creation back to Bonnie's care. In the process, Woody meets old friends and new friends to help him on his journey.

More than any other film in the series, this film is solely Woody's story. As a result, most of the other toys take a back seat. It was disheartening seeing so many beloved characters being reduced to background extras. Even fan favorites like Jessie and Buzz Lightyear get brushed aside for new toys, some memorable (Keanu Reeves is great as Duke Caboom), most forgettable. Toy Story 4 tries to be a new and exciting entry to the series, but it never gets close to the creative and emotional highs of the other films and ends up feeling more like a rip-off film than a genuine sequel.