Something Soulful to Ponder 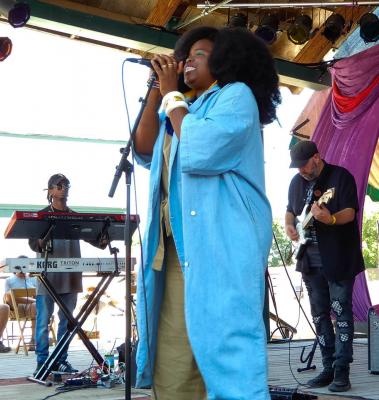 Hop aboard the soul train as it makes a stop at the King's Rook Club with the powerhouse vocals of Danielle Ponder & The Tomorrow People, along with "hippie hop" Erie natives, The LEC.

"Opening up for Danielle Ponder & The Tomorrow People will be an honor. She is an incredible artist, and it will be a pleasure being on the same stage as her that night," says lead vocalist of The LEC Jonny Evans.

Ponder, a Rochester, N.Y. native, and her talented band members are known for their fusion of funk, soul and jazz. Ponder illuminates the stage with her seductive and riveting vocals as she states, "soul music is something you feel...it gives you goosebumps."

Though Ponder is well-regarded for her empowering vocals, she is also a passionate activist and speaker, and has been a defense attorney for over 15 years. She has worked on a variety of issues from educational funding, women's rights, and even created a 2017 multimedia show titled "For the Love of Justice," which uses powerful lyrics and visuals to shine a light on the criminal justice system. The group has opened for acts such as George Clinton and The Roots, and has also completed two successful European tours. After drawing comparisons to influential artists such as Nina Simone and Lauryn Hill, now it's Ponder's time to shine.

Setting the tone for the evening, The LEC will perform all original music comprised from elements of hip-hop, funk, rock, soul and blues. The group has been together for about seven years now, performing at local festivals such as The Gathering at Chaffee's and Night Lights. Evans states, "The King's Rook Club is always a great place to play. The atmosphere is top notch, and the sound and lightning which is controlled by Sam Edwards is always on point and brings the best out of the bands that perform there."

Prepare for an uplifting night as the mix of these two bands on stage is sure to awaken the mind with good vibes and amazing music. — Symone Crockett