The well-cast comedy ultimately suffers from a failure to launch. 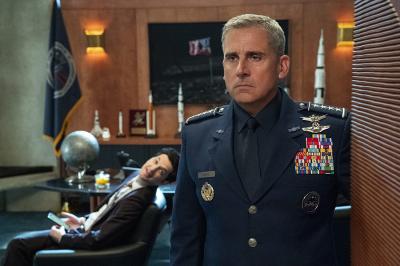 If Michael Scott had a military career, married Phoebe Buffay, and was put in charge of astronauts, the results would look something like the new series Space Force, now streaming on Netflix.

The series follows General Mark Naird, played by Steve Carrell, who is put in charge of Space Operations for the U.S Armed Forces. While a good leader who values the needs of people, Naird knows little to nothing about the science behind the President's mission to have "boots on the moon by 2024." The many responsibilities of his job, on top of being a father to an angst-ridden daughter (Diana Silvers) without the help of his wife (Lisa Kudrow), who is incarcerated for reasons that are never explained, create a significant amount of stress that he can only relieve through singing to himself at least every episode.

While the concept is brilliant — and is arguably worth it just for the fact that it beat the Trump administration's military branch to the copyright punch — the first season seems to be in a hurry to get people excited for the next one, without dedicating time to building all of the characters. Viewers become pretty well acquainted with Naird and scientist Dr. Adrian Mallorie (John Malkovich), as well as their fumbling attempts to understand each other as coworkers and possible friends. Ben Schwartz plays a fast-talking media manager known as F. Tony whose attempts to keep Naird up to date on current slang and trends is quite entertaining. Unfortunately, fleshing out the A plot leaves little room to properly build on additional characters to a point where the audience can't identify with them. Tawny Newsome and Jimmy O. Yang play coworkers that have their own side plot centered around a bond that developed in minutes and seemingly out of nowhere. Hopefully, if the show is renewed, more time will be dedicated to the development of everyone's motivation and arc. — Claudia Rose