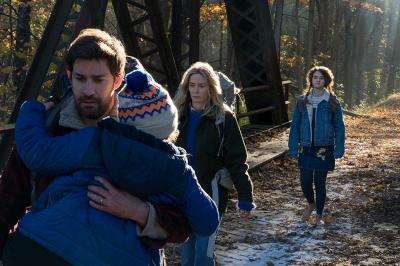 I don't think I'm bragging when I say I'm something of a horror movie connoisseur. I've seen so many horror flicks that it takes quite a bit to genuinely surprise me and with that being said, I can happily say that John Krasinski's film A Quiet Place was a pleasant little surprise.

The film follows the day-to-day lives of a family trying to survive after the world has been ravaged by sightless creatures who hunt by sound. Due to the creatures' super sensitive hearing, the family is forced to live in near complete silence. They can only communicate via sign language and must be extra cautious of where they walk and what they do because the slightest loud noise could mean their doom.

It goes without saying that the real star of this film is the incredible sound mixing. Often filled with long stretches of silence, the slightest ambient noise is enough to create a world of suspense for the audience. I would go so far as to say that the first 30 to 40 minutes of the film is a near perfect example of tension building. Krasinski has a lot of fun scaring the audience with what we hear and what we don't hear. Sadly when the creatures actually show up in the later half, it turns into a more cliched (though well-made) monster movie fare, trying to scare through special effects set pieces rather than good old creeping tension. That being said, A Quiet Place has enough nerve-wracking sequences to leave any horror fan speechless. — Forest Taylor