Raising a racket at the Erie Table Tennis Club 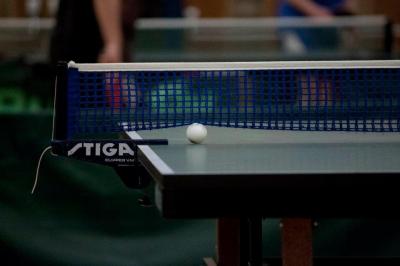 Contributed Photo
Table tennis, once a parlor game of inexact dimensions, has evolved into an Olympic sport with very specific guidelines u2014 a table 9 feet long, 5 feet wide, and 30 inches tall, a net measuring 6 inches tall, and a ball weighing 2.7 grams (less than an ounce)

If the words "whif whaf" and "flim flam" do not seem synonymous with "nonsense," then you're probably too young to have attended an upper-middle class Victorian dinner party. Despite their stuffy reputation, it turns out the English of that era were a lot sillier than we give them credit for. Sometime in the 1880s, in opulent dining rooms unknown, a global phenomenon was born — on the very same tables that Cornish hens and fancy cakes were served. Yes, table tennis, now an Olympic sport, originated with a few (reputedly) severe people goofing off after supper.

The game, which is today governed by the International Table Tennis Federation (ITTF), comes with an extensive set of rules and regulations —the 2018 ITTF handbook weighs in at a hefty 207 pages. But back in the days when it was still called "gossamer," "whif whaf," or "flim flam," it only mattered that the contestants could functionally mimic lawn tennis with common household items (e.g., the net = books from the study, the rackets = cigar box lids, the ball = a champagne cork). That is, until companies caught on and designed proper equipment worth the proper investment of the bourgeoisie. The most notable of these was British manufacturer J. Jacques & Son Ltd., who trademarked the name "ping-pong" in 1901.

Ping-pong's popularity spread rapidly in the early 20th century, both throughout Europe and Great Britain's colonies in Indochina, eventually gripping Southeast Asia at large. Japan would come to dominate international competition after Horoi Sotoh showed up to the 1952 world championships with a revolutionary foam rubber paddle (which radically altered the physics of the game). China overtook Japan by the mid-'60s and very rarely relinquished its top spot until 1988, when table tennis was approved as an Olympic sport. Currently, China, Japan, Chinese Taipei (which includes Taiwan), Hong Kong, and Korea Republic are all ranked top 10 worldwide in both men's and women's competition, showing that Southeast Asia is still very much holding serve.

While table tennis is far from America's game (neither U.S. men nor women are ranked in the top 20), it is very much a microcosm of American diversity. That is immediately evident the moment I walk into the McDowell Intermediate High School gymnasium on a random weeknight in late January. The Erie Table Tennis Club has assembled here since 1990 (before that, the Glenwood YMCA), meeting on Thursday and Saturday evenings. The club has over 100 members, ranging from teenagers to senior citizens, with nationalities spanning the globe. Players come from China, India, Myanmar, the Ukraine, Russia, Pakistan, Korea, El Salvador, and North America (as in for real— the Seneca Tribe has a representative). Some are naturalized U.S. citizens, while others are foreign contractors for local companies who speak virtually no English at all.

No matter where they're from, the one language players must know is spin. "If you cannot read the spin, you miss instantly. If you don't give [your opponent] spin, they can rally," explains Erie Table Tennis tournament director and founding member Sam Steiner.

The modern ping-pong racket, or bat, has three components — the blade and the rubber pads affixed to either side (largely responsible for generating the spin). By developing and perfecting topspin (a downward curve applied by brushing the ball from above) and backspin (an upward curve applied by grazing the ball from below), one can manipulate an opponent's eyes and encourage the moment's hesitation so crucial to victory.

Compared to a ping-pong ball, the Earth rotates much more predictably — counterclockwise on its axis, at a tilt of about 23.5 degrees, 365.25 times a year. Twice during this cycle, the Erie Table Tennis Club hosts its ITTF-sanctioned tournaments, which regularly draw over 100 competitors, many of whom travel in from out of town (in some cases abroad). Once everyone is assembled within the confines of the MIHS gym, however, there is plenty of room for the unexpected. For instance, the men's finals of last year's Millcreek Open pitted a 15-year-old against a 44-year-old.

Age is just a number; a player's rating is everything. This number grows or shrinks at a pace commensurate with a match's predicted outcome. For example, if a player wins or loses to an opponent with an identical or nearly-identical rating (thus similarly skilled), the change is incremental (plus or minus 8 points). However, when the disparity is greater, ratings can rise or fall by as many as 50 points. Although that is rare, one has to assume the world's top-ranked players (with ratings of 16,000-plus) did not ascend to such heights without pulling off an upset or two along the way.

The majority of local players, though, have more in common with their Victorian predecessors than their Olympian contemporaries. They're here to socialize and work off a little steam after dinner, all throughout the inclement seasons that do not include summer. And in the cases where words do not land within the bounds of comprehension, they let their rackets do the talking.

"It's a universal game. Everyone knows the rules. As long as you can count in your language, you can play."
Sam Steiner

All forehand insults and backhand compliments can be directed to mswanseger@eriereader.com

In Your Hometown: Brass Ensemble