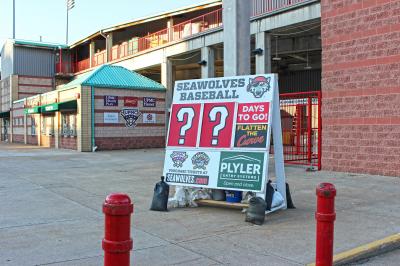 Nick Warren
The sign outside of UPMC Park, which was counting down the days until the season started, has been adorned with question marks, as well as a pretty darn clever slam on rival PA Minor Leaguers, the Altoona Curve.

Whether it's a matter of seconds or a full 15-20 minutes, few major sporting events proceed without any interruption in the action. Individual competitions are divided up into rounds or sets or periods or quarters. Seasons are broken up with bye weeks or all-star breaks as coaches and athletes prepare to make their final push for postseasons — which, again, usually follow some form of delay for the requisite hype-building.

We're used to timeouts — but not like this. Aside from news concerning the recent NFL free agency and upcoming NFL Draft, the COVID-19 pandemic has effectively neutralized water and Gatorade cooler conversations around the world. Frustrated and anxious, the sports world sits in its penalty box pounding on the glass, wondering if the games will ever go on.

Alas, public health is not a matter to be played with, so as we all ride the bench (separately but) together, let's take a moment to catch up with Erie's sports teams, their leagues, their statuses, and when to expect a return. Few comebacks will have ever been so sweet.

Most recent action: The SeaWolves finished the 2019 season with their best record in years at 77-61, good for best in the Eastern League's Western Division. However, due to the oddities of the league's playoff format, the SeaWolves narrowly missed out on the postseason (they finished with an identical 46-26 record to the Bowie Baysox in the second half before losing a tiebreaker).

Looking forward: Upgrades to UPMC Park totaling $12 million (thanks to a state grant awarded in 2018) continued throughout the fall and winter — whenever the 2020 season is given the green light (Minor League Baseball president and CEO Pat O'Conner is very much taking a "wait and see" approach), fans can expect an enhanced gameday experience, with overhauled restrooms, concession areas, and suites. The most obvious development to most will be the new four-story building between Erie Insurance Arena and the former Sausage Shack picnic area in left field, which will house year-round SeaWolves and Otters team stores, offices, and a stadium club up top for unprecedented views.

"We can't wait for fans to experience all of the upgrades and additions to UPMC Park.  The new special event areas are really spectacular and perfect for summer picnics and corporate team-building," said SeaWolves team president Greg Coleman.

For now, though, construction is on hold due to Gov. Wolf's public health order.

On the team side, SeaWolves fans can expect to see up to four of the MLB's Top 100 prospects pass through Erie this season — right-handed pitchers Casey Mize (No. 1 RHP prospect, No. 7 overall) and Matt Manning (No. 7 RHP, No. 24 overall) are expected to join the SeaWolves' parent club Detroit Tigers at some point this season after successful debuts in 2019. Left-handed pitcher Tarik Skubal (No. 4 LHP, No. 46 overall) ended last season with the SeaWolves on fire, racking up 82 strikeouts and compiling a 2.13 ERA in nine starts. Outfielder Riley Greene (No. 9 OF, No. 31 overall) will likely start in center field for the SeaWolves at some point in 2020 after spending 2019 hopping between the Tigers' Single A affiliates.

Most recent action: After clinching the eighth and final playoff spot in the Ontario Hockey League's Western Conference, the Otters were poised for an encounter with the top-seeded London Knights in the postseason. However, on Monday, Mar. 23, the Canadian Hockey League (the governing body for the OHL and its sister leagues the QMJHL and WHL) officially announced the cancellation of all CHL playoff tournaments and the 2020 Memorial Cup (a round-robin tournament that determines the winner of the entire CHL).  The Otters finished the 2020 season with a 26-26-4-7 mark (63 points) with five games left to play.

Left winger Maxim Golod led the squad in points with 78, with center Chad Yetman leading in goals (43) and Golod in assists (53). Goalie Daniel Murphy led the team in starts with 43, compiling a 16-18-3-3 record and .891 save percentage.

Looking forward: With the 2020-21 OHL season not slated until September, the expectation is that league operations will resume as normal. In the meantime, fans can still follow the OHL Draft online at ontariohockeyleague.com on Saturday, Apr. 4 as the Otters look to rediscover the success of their 2017 championship season.

Most recent action: Following in the footsteps of the NBA, the NBA G League announced the suspension of its 2019-20 season on Thursday, Mar. 12. It's almost certain that the remaining regular season games and subsequent playoffs will never be made up as the league turns its attention to next fall. When the NBA season does resume (tentatively this summer), two-way players such as Erie BayHawks point guard Josh Gray (fifth in G League scoring with 22.5 points per game) and forward Zylan Cheatham (fifth in rebounds at 11.6 per game) will be eligible to return to their respective NBA squads (in this case, the New Orleans Pelicans).

As a collective, the Erie BayHawks did not have a season to remember, finishing the year with a dismal 13-30 mark (second-worst in the Eastern Conference) with seven games to play and a playoff berth out of reach.

Looking forward: The BayHawks will return to Erie for at least one more season as the New Orlean Pelicans' affiliate. The Pelicans will partner with a Birmingham franchise to be named beginning in 2022.