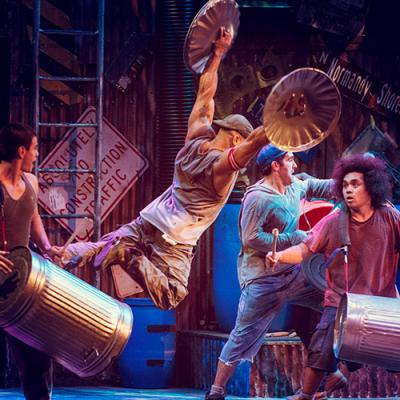 When Stomp first premiered on stages in 1991, it created a sensation. The eight-member ensemble performed shows unlike anything ever seen before, with percussive "songs" played out using ordinary household items like brooms, trash cans, matchboxes and Zippo lighters. These were fused with innovative, imaginative choreography. Since then, the UK-based show has reached iconic, instantly recognizable status worldwide. It was featured in the 2012 London Olympics closing ceremony, and has played continuously in London's West End for the last 15 years, garnering handfuls of major awards along the way.

Now it is pulsing its way into the renovation-enhanced Warner Theatre as part of the Broadway in Erie series, giving music lovers in this small city something worth braving the frosty January temperatures and heading downtown for. This ensemble is part of the latest North American tour, and while the thumps, scrapes and brushing are as lively and unchanged as ever, the show boasts two brand new routines that add even more unexpected props into the mix.

Theatergoers who cannot make the Tuesday night performance will have a second opportunity to catch the one-hour and forty-five minute show on Wednesday. Stomp provides an excellent opportunity for parents who want to infuse a little culture into their kids' lives, as the envelope-pushing yet accessible act runs much briefer than most Broadway shows (by comparison, Les Miserables clocks in at almost three hours), yet promises to hold the entire audience rapt with technically impressive beats, sounds, and motions — all of which seem impossibly cool. — Cara Suppa

Visual Arts
1/17/2018 at 7:30 PM
Warner Theatre, 811 State St.
Stamp on downtown for 'Stomp' at the Warner When Stomp first premiered on stages in 1991, it created a sensation. The eight-member ensemble performed shows unlike anything ever seen before, with p...
stompwarner theatrebeatssounds