What better way to greet December than with a full slab of bone-crushing metal? 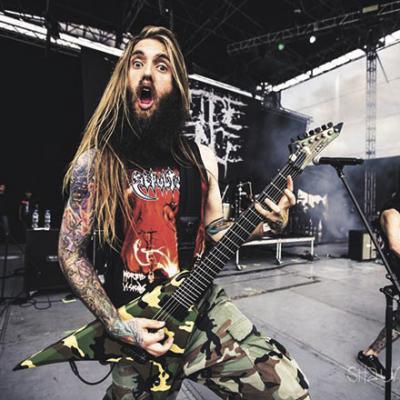 What better way to greet December than with a full slab of bone-crushing metal? The Entertainment Collective will be hosting yet another monstrously heavy show at Basement Transmissions, with Suicide Silence celebrating the 10-year anniversary of their first studio album.

Although the California-based deathcore band formed in 2002, they did not release their first full-length studio album, The Cleansing, until 2007. But the wait only gave them time to perfect their craft, as the release became one of the best-selling debut albums in the Century Media record label's history. Suicide Silence has gone on to release four more albums, including a self-titled album this year, and have solidified themselves as a staple of the deathcore music scene. But there's something about first albums that are always closer to the hearts of fans, and that's what this tour is here to celebrate.

Supporting Suicide Silence on this tour are Upon A Burning Body, Slaughter to Prevail, and Prison. Upon A Burning Body has been in the metal game for a while now, and their latest albums have leaned more towards a nü-metal/southern metal sound and away from their original metalcore writing style. But nonetheless, they are still a well-established band, whereas Slaughter to Prevail, with members from both Russia and the UK, and Prison, from Florida, are relative newcomers to the scene. Both bands formed in 2014, but hit the ground running and are quickly growing their fan bases.

Local bands for the night are Amavasya and Livid Life. Amavasya's excellent songwriting and shredding guitars on their album Fruition make them one of the best metal bands in Erie, and Livid Life prides themselves on being the latest band to pick up the "Lake Effect Hardcore" torch, being the youngest band in a long history of Erie hardcore. — Tommy Shannon