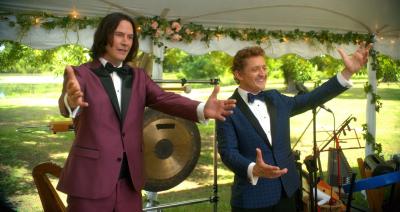 The writers and stars of the Bill & Ted movies have been teasing a possible third entry in the series for quite some time now. There were doubts that it would ever be made, but now the story of two dopey guys saving the world with the power of music feels like a breath of fresh air. Unfortunately, Bill & Ted Face the Music is a bit of a mess with an overabundance of subplots and neither the clever storytelling of Excellent Adventure nor the demented creativity of Bogus Journey. However, the film's message of positivity makes it impossible to hate.

Thirty years after their first adventure, Bill S. Preston, Esquire (Alex Winter), and his most excellent friend Ted Theodore Logan (Keanu Reeves) still haven't written the song that was foretold to bring about world peace. Upon hearing a warning that the world may soon end, they travel forward in time to get the song from their future selves. Meanwhile, their daughters Billie (Bridgette Lundy-Paine) and Thea (Samara Weaving) travel back in time to get together history's greatest musicians to help them in their task.

Winter doesn't miss a beat getting back into Bill's fun-loving shoes. Reeves, on the other hand, has trouble replicating the energy of a character he has clearly outgrown. The youthful energy of the older films can be better found in Weaving and Lundy-Paine, who do a great job re-creating the silly scenes that made those films so much fun (shout-out to a musicians duel between Jimi Hendrix and Mozart!). In the end, Bill & Ted Face the Music is harmless fun, but don't expect it to make history. — Forest Taylor