Stepping Into a New Line of Inquiry

Asking questions, and lots of them 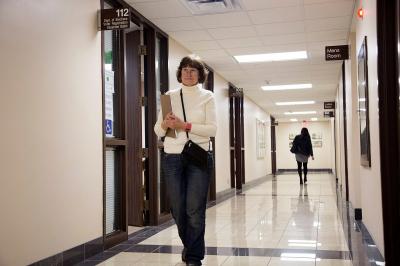 As Curtis Jones Jr. said his goodbyes during the Dec. 20 City Council meeting, he mentioned that when he won the first of his three terms in 2005, he was the youngest person ever elected to council.

I enjoyed those lighthearted moments for two reasons. First, at age 66, I suspect I'm the oldest person ever elected as a first-time council member.

Secondly, I liked the fact that the affable Jones fixed his mistake from the dais. I'm a lifelong journalist and fact-checking is part of my DNA, but I've wondered how my penchant for asking lots of questions to determine the facts will play out in the political arena.

I already have an inkling. Before I was even sworn in on Jan. 2, a City Hall veteran offered me a bit of advice: "Remember, you have two ears and one mouth." That advice came from the same person who feared I had committed a big blunder two weeks before the Nov. 7 election. After I posted on Facebook that George H.W. Bush had touched me on the butt when we posed for a photo in 2004, Erie Times-News reporter Kevin Flowers interviewed me. The advice-giver and two political strategists chided me. Better to be seen and not heard so close to the election, they said.

Their intention was honorable and their gut was right. On social media, people called me a liar, a "ho," fat, ugly, a political opportunist and a money-grubber. It was a rude introduction to incivility at a time when I chose to run for public office as part of my civic duty.

My fleeting #metoo moment did come back to haunt me on Election Day. Outside a polling station in southeast Erie, an elderly woman with a beaming smile said that she had intended to vote for me until I used "poor judgment" by "writing a letter to the editor" about my encounter with Bush. My effort to explain the difference between a letter to the editor and a news story failed, and I was left to wonder why I was the one with "poor judgment" when it was the former president who had pinched me.

I told the voter that I'm a journalist who believes in reporting the truth, and I'd apply the same standard for vetting things if I were elected to City Council. But I had already lost her vote.

One way to determine facts is to ask questions, and I asked a lot of them at council's three budget sessions. Kathy Schaaf, also newly elected to council, and I were invited to the budget meetings as a courtesy. Word spread about my inquisitiveness.

But I had read the proposed budget cover-to-cover, made lots of notes and felt compelled to educate myself. Why had the amusement tax declined from $367,613 in 2015 to a projected $316,100 in 2018? Why was revenue from parking fines expected to increase from $843,500 in the 2017 budget to $874,831 in the new year? How does the Office of Police Civilians use its $254,215 in overtime? What kind of wellness program does the city offer to hold down healthcare costs? And why does one councilman insist on referring to police officers and firefighters as "policemen" and "firemen?"

OK, that last question wasn't budget-related, but journalists have used gender-neutral terms to refer to occupations for years. It's spelled out in our "Bible," the Associated Press Stylebook. In fact, I first advocated for inclusive language in 1972, when I served as the student representative on an all-male search committee for a new journalism school dean. Every time a male professor said the committee was looking for "a man" with a certain pedigree, I'd quietly interject, "or woman."

My protests fell on deaf ears; it would be 16 years until a woman was named dean of my alma mater. But I can't complain about the guy who got the job in 1972 – George Reedy, former press secretary to Lyndon Johnson and author of The Twilight of the Presidency.

Reedy had been a reporter for UPI before he went to work for LBJ. If Reedy were still alive (he would have turned 100 this year), I would have loved to pick his brain about his transition from journalism to politics, then his return to journalism to finish out his career.

I'm certain he would encourage me to keep using my journalism skills to ask questions at City Hall. It's hard to turn off the interrogative sentences when you've been doing it since age 18, which is when I began my first reporting job, at the former Morning News.

It was May 1972 and I had started my summer internship at the old Times Publishing Co. building at East 12th and French streets. A few weeks later, the newspaper would move to its current location at 205 W. 12th St., but I got to launch my career in a setting straight out of the Front Page, with clanging teletypes, ringing phones, yelling reporters, chain-smoking editors and papers flying off the hot-lead press.

After I made my first-ever set of "police checks" to scrounge up news from the tri-state area, I banged out a brief about a man who had been arrested with gun.

I yanked the copy paper out of the typewriter roller and took my story up to the city editor. Peering over his glasses, he handed the story back and barked: "Was it a handgun or a rifle?"

With a red face, I went back to the desk, called the police station and asked about the type of gun. Handgun, the police officer told me.

I did a rewrite, said that the suspect had been arrested with a handgun and trotted my story back to the city desk.

Dejected, I picked up the phone and called the police officer again.

I learned a valuable lesson that night. Never be afraid to ask questions, even if you have to repeat them or rephrase them, until you nail down the details.

I don't remember the diameter of the gun from that long-ago crime, but I hope to bring a high caliber of questions to my new job on City Council. And if I'm not the oldest first-time council member, let me know. I'm happy to stand corrected.

Liz Allen retired from the Erie Times-News after nearly 32 years as a reporter, editor and columnist. You can follow her rookie adventures on City Council in the Erie Reader.