From the post office to public education to our water supply and Social Security pensions, conservative radicals seek privatization of programs generations of our forebears thought too critical to subject to the whims of the market and rapaciousness of profit seekers.

by Jay Stevens
View ProfileFacebookTwitterGoogle+RSS Feed
May 2, 2012 at 9:12 AM 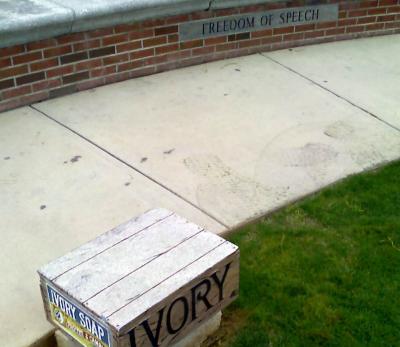 Two authors -- one each from a conservative and centrist think tank -- wrote an op-ed for the Washington Post this weekend, called, "Let's just say it: The Republicans are the problem."

"We have been studying Washington politics and Congress for more than 40 years, and never have we seen them this dysfunctional," write the authors. "Today, however, we have no choice but to acknowledge that the core of the problem lies with the Republican Party."

Why? Because conservative extremism is now mainstream, and its anti-government and anti-tax rhetoric has created gridlock in federal government and handicapped the nation's ability to respond to national problems, like climate change, the national debt, and the health-care crisis.

The media is partly at fault, too, presenting "a balanced treatment of an unbalanced phenomenon," distorting reality. "Our advice to the press: Don't seek professional safety through even-handed, unfiltered presentation of opposing views."

Really? They're only getting around to noticing now? After two preemptive invasions that led to decades-long and budget-draining wars? After the implementation of the Patriot Act, domestic spying, wire-tapping, and torture? The near-collapse of the economy, and the recession that followed? All of which were the result of extremist conservative policy, from free-market-driven deregulation to the neoconservative "Bush doctrine?"

Closer to home, this conservative extremism is creating irreparable harm to Pennsylvania. The governor's administration and the GOP-led legislature have slashed the funding for critical state services -- yes, like education, or public health-care coverage for tens of thousands of Pennsylvania children -- while preserving a regulation- and tax-free environment for the oil and gas industry.

Or that passed a law -- asset testing of food-stamp recipients -- that will not only cost the state more money than it recovers, but hamper people from escaping poverty and making them more reliant on state subsidies.

Or that is now proposing a bill -- House Bill 2191 -- that would allow payday lenders to charge more than 300 percent interest to lower- and working-class Pennsylvanians in the name of the "free market" against payday checks, as well as Social Security and unemployment checks. (Perversely, state House Republicans are calling HB 2191 a "consumer protection" bill.)

Or that is now proposing a bill -- House Bill 2150 -- that's ostensibly presented as a means to close the "Delaware" tax loophole, but actually preserves it while slashing the corporate tax rate by 30 percent over the next four years, which will end up costing the state nearly a billion dollars in yearly revenue when fully phased in.

It's almost as if conservative lawmakers want to destroy public services -- which might actually be the case. From the post office to public education to our water supply and Social Security pensions, conservative radicals seek privatization of programs generations of our forebears thought too critical to subject to the whims of the market and rapaciousness of profit seekers.

Meanwhile there are no radicals on the left. Even Occupy protesters' typical policy demands revolve around tweaks to the tax policy or implementation of single-payer health insurance -- a system of coverage embraced by all other industrial nations -- not the overthrow of government.

So, yes, Republicans are the problem with government today. That's hardly surprising. What is surprising is that it's taken so long for some to notice.