Street Corner Soapbox: Manti Te?o and the Saga of the Fake Girlfriend

Jay Stevens tells us what's at stake in the ever-evolving the scandal involving Manti Te'o and a person who doesn't exist. 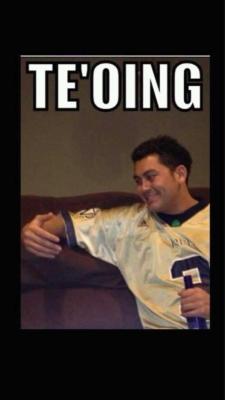 I don't know about you, but I can't tear myself away from the Manti Te'o fake dead girlfriend story. You know all about it. If not, you're probably just crawling out of the well you've been trapped in the for the past couple of weeks. It's a completely ridiculous story, of course, holding little or no meaning for the wider world. I mean, the biggest consequence of the story is that the linebacker's position in the NFL draft will probably shift a few places downward.

The biggest question now is whether Te'o knew the girlfriend was a hoax all along or not. If not, the guy is a dupe, a sucker. If so, he's a manipulating liar. "Only by admitting he's gay," wrote Bill Simmons in his all-Te'o mailbag on Grantland, "could everything that just happened to Manti Te'o seem, for the lack of a better word, a little more normal." Couldn't agree more: that he created a fake girlfriend to cover up his sexuality from a homophobic institution, sport, and religion, which got out of control, would actually make the dude seem worthy of sympathy. Probably not going to happen.

But there is a larger, serious issue surrounding the fake dead girlfriend, and that's the bungling of very prominent news organizations for allowing the story to get this far in the first place.

In this case, it seems to me the primary culprit is Sports Illustrated. The magazine ran a profile of the Notre Dame star on Oct. 1 of this year, telling the story of how Te'o's "girlfriend" died of leukemia and how it inspired him into stellar performances and aided his team's ascension to the top rank of college football.

In a piece released this weekend, author of the original story, Pete Thamel, explained how he had seen some "red flags" in the girlfriend story – he couldn't find any record of Lennay Kekua's death, of her ever attending Stanford University, as claimed by Te'o, or of the car accident Te'o claimed Kekua had been in – but ran with it anyway, because he had "little reason to believe she didn't exist." The same piece published the transcript of Thamel's interview with Te'o, and it all seems so unlikely and crazy and the perfect news story that even Thamel himself says, "This is unbelievable," during the interview.

So, it's all Thamel's fault? Well, not really. According to Thamel, he was under pretty severe time pressure to write the article. "On Sunday, Sept. 23, I sat down with Manti Te'o for a story that was due two hours after the interview concluded and would appear on SI's cover that week," explained Thamel. That's an extraordinarily quick turnaround, and there's no way a writer could perform the proper due diligence in such a short time period.

Which means it was editorial oversight that was skewed. Thamel's editor should have noticed the glaring holes in the copy, should have drawn out Thamel's red flags, should have pressed for a quote from the fake dead girlfriend's family, friends, somebody.

So, it's the editors' fault? Well, not really. In June of this year, Time Inc. Sports Group, the company that publishes the sports magazine laid off a portion of its editorial staff. It's the typical move of a corporation looking to cut costs at a print publication that's losing profitability. But the move also means the magazine's editors are less able to devote the time and attention to, well, editing.

And there's the issue. Newspapers and magazines across the country are ditching their most expensive assets – editors, investigative reporters. Overworked journalists and editors are left creating copy quickly. Instead of researching and investigating for stories, papers will, for example, sometimes run slightly reworded press releases, or reiterate claims made by figures in authority (in this case, Manti Te'o) without checking their facts.

It's a systemic problem, one that will probably only grow deeper as newspapers' revenues shrink and publishers continue to cut staff. And, at stake is an accurate accounting of events as they take place. At stake is the news.