How many bars of soap fit in this box? Jay Stevens serves us a Soapbox Year in Review like only he can.

by Jay Stevens
View ProfileFacebookTwitterGoogle+RSS Feed
December 28, 2011 at 9:00 AM 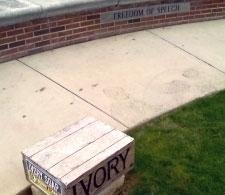 56. The age of Apple co-founder Steve Jobs at his death on October 5.

21. Jobs' age when he and Steve Wozniak founded Apple and created the Apple I computer.

20.34. The number of iPhones, in millions, sold worldwide in the first half of 2011, according to Apple.

73.73. The number of iPhones, in millions, sold worldwide since its introduction in 2007, according to Apple.

215. The average monthly wage of a Foxconn-employed Chinese worker making Apple products, in U.S. dollars, which comes to about $1.10 an hour.

11. The number of 2010 worker suicides that led Foxconn to install safety nets under the windows of worker dormitories at their Chinese manufacturing plants, where workers sleep eight to a room.

500,000. The number of workers employed at the two Chinese manufacturing plants owned by Foxconn where Apple products are made.

11. The time, in minutes, remaining in the July 11 women's soccer semifinals World Cup match between the U.S. and France when U.S. striker Abby Wambach headed a ball into the back of the French net to break a 1 - 1 tie. The U.S. won the game, 3 - 1.

1. The time, in minutes, remaining in the July 9 women's soccer quarterfinals World Cup match between the U.S. and Brazil when U.S. striker Abby Wambach headed a ball into the back of the Brazil net to tie the game during overtime. Wambach's goal sent the game into penalty kicks, which the U.S. won, 5 - 3.

5. The time, in minutes, remaining in the July 17 women's soccer finals World Cup match between the U.S. and Japan when Japanese midfielder Homare Sawa scored on a corner kick to tie the game during overtime. Sawa's goal sent the game into penalty kicks, which Japan won, 3 - 1.

13.5. The estimated number of U.S. viewers, in millions, that watched the 2011 women's soccer World Cup final between the U.S. and Japan. The game was the second-most watched daytime cable sports event in television history.

63. The age of rock musician and soap-opera star, Rick Springfield.

79. The age of actress Elizabeth Taylor at her death on March 23.

12. Age of Elizabeth Taylor when she starred in "National Velvet" in 1944.

160. The number of dead and missing from the May 6 tornado that struck Joplin, Missouri.

20,364. The number of dead and missing from the March 11 earthquake and tsunami that struck Japan, as reported by that country's National Police Agency in mid-August.

151,000. The estimated number of Iraqis killed as a result of the U.S. invasion and occupation of Iraq from March of 2003 to June of 2006, according to the World Health Organization's (WHO) Iraqi Family Health Survey. The survey polled over 9,000 families across Iraq and found that war-related violence was the leading cause of death among men ages 15 to 59.

7.4. The number of tsunamis equivalent to the one of March 2011 that would have to sweep Japan to inflict the same number of civilian casualties as Iraq experienced by WHO estimates during the first three years of the Iraq War.

944. The number of tornadoes equivalent to the one that struck Joplin, Missouri, that would have to sweep the Midwest to inflict the same number of civilian casualties that Iraq experienced by WHO estimates during the first three years of the Iraq War.

4,500. The approximate number of U.S. military deaths during the Iraq War, according to the U.S. Department of Defense.

80. The average length of time, in minutes, between suicide attempts by U.S. military veterans of Afghanistan and Iraq, according to a recent study, as a result of high unemployment, loss of comradeship, post-traumatic stress, and a lack of adequate mental health care for military service personnel. Over 2,000 active and veteran military personnel have taken their own lives since 2001, when the U.S. invaded Afghanistan.

63. The age of writer and political pundit Christopher Hitchens at his death from cancer on December 15. Hitchens was an avid proponent of the U.S. invasion of Iraq.

7.9. The unemployment rate in November 2011 in Erie. The recent national drop in unemployment is in part the result of workers leaving the work force -- that is, not solely because of new jobs. In Erie, there are still some 10,000 unemployed.

10.2. The "U5" national unemployment rate in November 2011. The U5 rate includes workers without jobs who haven't recently looked for work.

15.6. The national unemployment rate in November 2011 when including as "unemployed" those workers who haven't looked for work recently, or who are part-time workers working as little as an hour a week, but who want full-time work. This rate is sometimes known as the "underemployed" rate.

3.6. The number of jobs, in millions, created by the stimulus bill passed in 2009, according to the President's Council of Economic Advisers this year and confirmed by the Congressional Budget Office and private economic analyses.

40. The number of weeks unemployment insurance would be cut under a Republican "reform" to unemployment.

15.1. The percentage of Americans living under the poverty rate, according to the U.S. Census.

30. The percentage of Erie residents that live under the poverty rate.

43. The percentage of Erie residents under 18 that live under the poverty rate.

2,341. The amount in dollars a household of four among the top 0.1 percent of U.S. income earners -- starting at about $1.6 million a year -- is saving under the current payroll tax cut. Congressional Republicans have voted down a payroll tax cut extension at least five times in recent weeks.

836. The amount in dollars a family of four earning the median U.S. income is saving under the Bush tax cuts.

104,000. The minimum amount, in dollars, that a household among the top 0.1 percent of U.S. income earners is saving under the Bush tax cuts. Under Democratic proposals, only the Bush tax cuts that apply to middle- and working-class families would be extended. Republicans favor extending all Bush tax cuts.

70. The 2011 median increase of U.S. CEO profits from stock options, in percent, according to GMI Ratings. Earnings from stock options is considered "capital gains," and is taxed at the same rate as income for a family of four earning $12,000 a year: 15 percent. The average earnings in capital gains for U.S. CEOs is now $1.3 million.

7,700,000,000,000. The amount, in dollars, that the U.S. Federal Reserve loaned in secret at near-zero interest rates to banks during the financial crisis, as revealed this year because of a Congressional audit.

5,546. The number of arrests of Occupy protesters as of December 17 in 96 cities, largely for violating city ordinances concerning public parks.

1. Number of arrests directly associated with the Occupy Erie protest.

0. The number of arrests as of December 17 of members in the finance industry for their role in the recent financial collapse of 2008, despite the documented cases of fraud that occurred during that time.

64. The number of consecutive days Occupy Erie has occupied Perry Square, as of December 17.

75. The age of Vaclav Havel, the Czech playwright and democratically elected president who helped bring down communism in his country, at his death on December 18.

4. The number of times Havel was imprisoned for dissent in the 1970s and '80s, serving over five years between 1977 and 1989. "I felt the need to stir things up," he wrote, "to confront others for a change and force them to deal with a situation that I myself had created."

42. The number days after a violent police crackdown on a student protest on before the communist government in Czechoslovakia fell, and Vaclav Havel was elected interim president on December 29, 1989, promising to establish a free and democratic government. The period between the first protests and Havel's election is known as the "Velvet Revolution."

0. The number of Czechoslovakians that died as a result of violence during the Velvet Revolution.

95. The percentage of Czechoslovakian citizens that voted in the June 1990 election. Havel and his political party won in a landslide, and the former dissident served in that office until 2003, when he resigned due to health reasons. Havel enjoyed wide popular support during his presidency.