Another black man killed by police. Another media circus. Another news story about the same thing.

by Jay Stevens
View ProfileFacebookTwitterGoogle+RSS Feed
April 29, 2015 at 9:30 AM 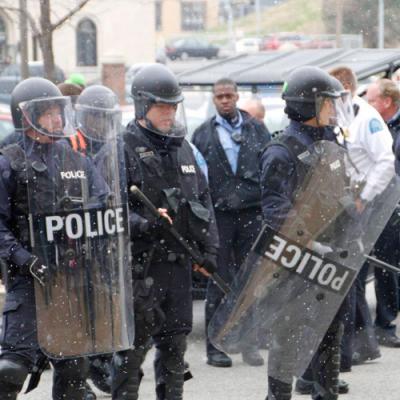 I mean, doesn't it feel like we're trapped on some kind of weird, in-between-events, same-old same-old treadmill lately? Like there's crazy important events going on all the time – only we've seen 'em all before, and nothing's really changing, just kind of hovering there, ready to drop on our heads?

Baltimore police clashed with protesters the other day. Some protesters got out of hand, stomped on police cars, broke windows, threw rocks and bottles at police. Fox News reports "dozens" are arrested; Reuters, 12. The clashes wandered over to Camden Yards, where baseball fans weren't allowed to leave the stadium. Images from the action are pretty graphic. A man throws a chair through a window. Police huddle around a protester and beat him.

Reactions are predictable. And here's some advice: don't read the comments at Breitbart.com. That kind of poison doesn't wash away easy.

The most predictable thing was how the national news covered the riot. Or didn't cover the riot. CNN refused to break from its coverage of the White House Correspondents' Dinner – or the "nerd prom" – while cops and protesters fought less than 60 miles away.

Personally, I'm finding it difficult to muster any outrage over a couple of busted cop cars and store windows.

It's nothing compared to what happened to Freddy Gray, whose death at the hands of the Baltimore police sparked the protests and riot.

Picked up by police for nothing more than making eye contact with police and running, Gray died of spinal injuries he suffered while in police custody. Video of his arrest show him being dragged off by police in pain – he apparently hurt his leg – but no one's saying how he suffered three fractured vertebrae or a crushed voice box during his trip to the police station.

No one probably ever will.

And Gray's death is nothing compared to the contents of a recent Baltimore Sun report on the $5.7 million in settlements paid to Baltimore residents for their treatment at the hands of police.

An 87-year-old woman was called a "bitch" by a white police officer, who threw her against a wall, forcibly handcuffed her, and shoved her face down on a couch, breaking her shoulder – for protesting the treatment of her grandson, who had been shot. A young pregnant woman was grabbed around the neck, slammed to the ground, and kneed to the back – for urging the police to stop harassing victims of a recent assault, but to go after the attackers.

One-hundred and two settlements since 2011. A litany of broken bones and injuries and even deaths that resulted in no prosecution of Baltimore police, even as civil courts found authorities liable for millions in damages.

Apparently the only way a police officer will face any charges for killing suspects, bystanders, or random people is if the whole thing's caught on camera. Like when 50-year-old Walter Scott was shot by Michael Slager, a South Carolina police officer. Over a traffic violation. Slager's facing murder charges thanks to video showing Scott lumbering across an empty lot and Slager coolly shooting him in the back eight times – then planting a taser next to the body.

Without the video, it's just a case of another black man trying to wrestle a taser from a police officer.

But there's a White House Correspondents' Dinner. And an earthquake. And Hillary Clinton is planning to raise and spend $2.5 billion for her presidential run, which is more than twice what Barack Obama spent in 2012, and which sounds like a lot, until you consider the Koch brothers alone are budgeting $889 million in presidential campaign donations. Meanwhile, Time runs a piece on Hillary Clinton and menopause. And Bruce Jenner is a transgender woman.

We're frozen. We're caught in some weird space-time continuum shift where nothing changes, everything is the same.

Wait! Isn't that another Erie study? This is Kathy Dahlkemper's brainchild, a study on whether an intermodal rail terminal is needed for the area. A double-whammy, right? A study on an idea that's already left the station (Ba-da-BUM!). The intermodal part of the rail terminal went ka-blooey along with John Elliott's inland port project, when a few hardy citizens complained about traffic.

But what the hell, studies are what Erie does best. So let's drop $100,000 on the rail terminal study.

Has anyone commissioned a study on the feasibility of Erie becoming the study capital of the nation? We could study other people's futures for them, write glowing reports on how their futures are brighter than Youngstown's or Albany's or Reading's.

It's worth a study, right?

And between the time I write these words and they're published, what are the odds another unarmed black man is shot by police?

Did anyone else read the Department of Justice report from Ferguson, Missouri? It told the story of a racially biased police force and municipal court system working hand-in-hand by harassing, charging, and fining the city's African-American population. It sounds similar to, say, a 2002 Mercyhurst University report that said Erie's minority drivers and pedestrians are more likely to be stopped and searched than the city's white citizens. And how many of Erie's 170-plus police force are African-American? Two? Four?

Harassment takes many guises. In Ferguson, a white-run law enforcement system judged a black community to lack the same basic values and respect for the law as its white community, and acted on that assumption by stopping, searching, and arresting African-Americans for petty crimes they more often let whites walk away from. The result? A community torn apart by criminal records and perceived lawlessness.

Now that's worth a study.

To get us off this treadmill, to get us unglued, unfrozen, to get us moving.