Money does not win elections. Well, money helps. But elections are rigged like the games you find on the carnival midway, but it's not money that decides them. Instead, it's redistricting.

by Jay Stevens
View ProfileFacebookTwitterGoogle+RSS Feed
May 15, 2013 at 7:00 AM 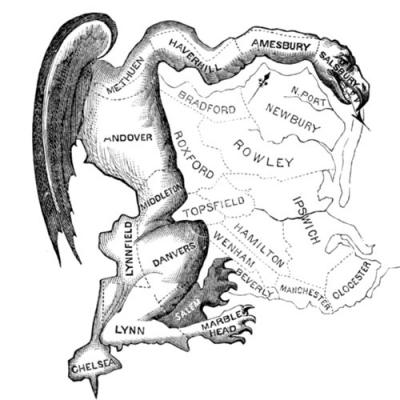 Money does not win elections. Well, money helps. But elections are rigged like the games you find on the carnival midway, but it's not money that decides them. Instead, it's redistricting.

If you've read my column regularly, you know I've railed against redistricting in the past. Redistricting, as you may recall, occurs every 10 years when state legislatures across the country redraw the boundaries of state and federal legislative seats based on changing populations.

What happens, of course, is that the majority party in the legislature draws zigzagging, odd geometric shapes for political boundaries to ensure that it remains in the majority. This process is known as "gerrymandering," and it's been with us as long as we've had redistricting. What's different now is that, according to Common Cause, a nonprofit championing redistricting reform, "advances in information and mapping technology has enabled a level of precision in district drawing that in effect, enables legislators to choose the voters they wish to represent..."

In Pennsylvania, for example, the Republican-led state assembly redrew the U.S. Congressional districts to ensure that it maintained its advantage in the House. In 2012, 49 percent of Pennsylvanians voted for a Republican candidate for Congress, but Republicans won 13 of 18 House seats from the state. Here in Erie County, over 30,000 voters were stripped from U.S. House District 3, allowing Republican incumbent Mike Kelly to coast to re-election despite winning a lower percentage of Erie voters than Republican Phil English did in 2008 – an election English lost.

But the redistricting of the state House and Senate seats were blocked by the state's highest court because of the "existence of a significant number of political subdivision splits that were not absolutely necessary," according to the Pennsylvania Supreme Court, a ruling so vague and unhelpful, it left legislative leaders flummoxed.

So, Republican leaders redrew the maps, and offered a kinder, gentler version of the state's electoral boundaries that was still obviously skewed to favor incumbents and preserve the Republican majority in Harrisburg. And the state Supreme Court approved the changes, despite charges that the map was still highly politically motivated. "Political parties may seek partisan advantage to their proverbial heart's content," ruled Chief Justice Castille in the court's unanimous decision, thus codifying partisan legislative maps.

In short, when you go to the polls in general elections, there won't be much mystery in the outcome of the race.

Redistricting reform has been proposed in the Pennsylvania Assembly – one bill would have put redistricting into the hands of a transparent nonpartisan board given specific instructions about mapping and public input. Other, broader reforms have been proposed – one, recently made by The Nation's John Nichols, suggested that the U.S. move to parliamentary-style elections with proportional representation instead of winner-take-all elections.

Both would be better than today's system, but both have a flying pig's chance of ice-skating in Hell. That's because incumbents – Republican and Democratic – prefer a system that makes their seats safe. And without a popular ballot initiative that allows voters to bypass the legislature and enact popular reform on their own, we're stuck with the system we have.