Should reporters fact check and call out lies and inaccuracies in quotes of interviewees? Jay Stevens answers that question from his Soapbox.

by Jay Stevens
View ProfileFacebookTwitterGoogle+RSS Feed
January 20, 2012 at 9:00 AM 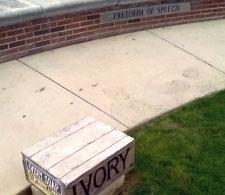 Recently, public editor of the New York Times Arthur Brisbane posted under the title "Should the Times be a Truth Vigilante?" what he thought was a nuanced question. Should the paper's reporters fact check and call out lies and inaccuracies in quotes of interviewees?

Brisbane's example dealt with a common campaign line from Republican presidential hopeful, Mitt Romney, in which he accuses President Barack Obama making speeches "apologizing for America." Should the Times reporter, asked Brisbane, "insert a paragraph saying, more or less, 'the president has never used the word 'apologize' in a speech about U.S. policy or history'"?

I'm not alone answering that question in the affirmative. Most of the user comments to the blog also wanted the Times to fact check and call out inaccurate statements. As did dozens of blogs. Vanity Fair's Juli Weiner posted one entitled, "Should Vanity Fair Be a Spelling Vigilante?" "The word 'maintenance' seems like it should have only one 'a' in it," wrote Weiner, "it should be 'maintenence,' right? But it's not. So is it our job as reporters and editors to spell it correctly?"

Apparently taken aback by the overwhelming response, Brisbane later wrote, "I must lament that 'truth vigilante' generated way more heat than light," and seemed genuinely puzzled. To Brisbane, fact-checking and printing a rebuttal amounts to a kind of bias. "Is it possible to be objective and fair," mulled Brisbane, "when the reporter is choosing to correct one fact over another?"

At stake here is the notion of "objectivity." The New York Times, and the myriads of newspapers that follow the Gray Lady's lead, strives for a kind of objectivity achieved by distance. NYU professor and media critic Jay Rosen calls it "The View From Nowhere," in which reporters try to attain a kind of "viewlessness" between "polarized extremes," often by resorting to a he-said, she-said narrative approach to writing articles. That is, reporting Person A's take on an issue, and then dutifully presenting Person B's, without making much of an effort to find out what's actually true or interpreting the comments.

There are obvious problems with this kind of narrative. For starters, bias still exists. The reporter chooses the quotes to use, for example. For another, if one of the parties in the issue is conveying bad information -- like Romney using his "apologizing president" meme -- they're still given equal weight, even if they don't deserve it. In short, it's the kind of gap you could drive a rhetorical truck through. It's the kind of gap the Bush Administration exploited to drive us to war with Iraq under false pretenses.

So why cling to this outmoded form of journalism? Fear. Those running the newsrooms are "beancounters" afraid for their jobs and careers, according to Esquire's Charles Pierce, and the editorial policies journalists work under are "speech codes written to prevent the beancounters and careerists from having to answer angry phone calls from wingnuts." Avoiding accusations of bias became more important than getting at the truth of a thing.

Thus, those who fact check quotes and disrupt the safe he-said, she-said format are considered "vigilantes" by at least one New York Times editor, reckless loners seeking justice outside the bounds of law.

The solution? Instead of pretending that objectivity is possible, journalists should be open about their views as they report. "I'm not going to pretend I have no view," says Jay Rosen, speaking for a hypothetical new journalist, "instead I am going to level with you about where I'm coming from on this. So factor that in when you evaluate my report." Transparency is the new objectivity, as David Weinberger put it. Transparency gives journalists more freedom to maneuver, allows them to openly call out politicians in reports and offer analysis of character and issues that otherwise is lacking in reports.

Not that facts are abandoned. Quite the opposite. Journalists -- as they do now -- should always relentlessly pursue the truth and present all the facts as they discover them. The views of the major players should be consulted and weighed, as before. The only difference between traditional journalism and Rosen's new paradigm is that the truth should matter.