Lights out. Paint it Black. The Internet went dark, and people took notice. When the lights came back on, there stood Jay Stevens on this Soapbox, ready to report.

by Jay Stevens
View ProfileFacebookTwitterGoogle+RSS Feed
January 26, 2012 at 8:00 AM 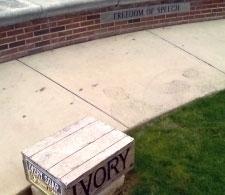 Last week led by Wikipedia, hundreds of websites went black -- including the Erie Reader's -- to protest the Stop Online Piracy Act (SOPA) and the Protect Intellectual Property Act (PIPA), currently under debate in Congress. Others, like Google, put up protest banners against the bills.

It worked. ProPublica polled Congressional offices during the protest and found that enough Congressional representatives have switched their stances to give SOPA/PIPA more opponents than supporters. It looks like the bills have been beaten back. For now.

What does it all mean?

Like most bills in Congress, SOPA/PIPA -- two versions of the same bill -- would have done more than their names imply. Essentially, the bills would have given authorities and copyright holders the power to shut down any websites harboring links to copyright-infringing material, putting an immense burden on any site with any significant user-created content, like YouTube, Facebook, or Twitter. After all, the cost and time it would take to monitor each and every comment, link, and account on those sites for illegal links would be cost prohibitive -- especially contrasted with how easy it would be to issue a notification or accusation of infringement under SOPA/PIPA, which doesn't have to be proved.

In short, SOPA/PIPA would have meant the end of the interactive Web.

It's also interesting to see who turned on the bill. Led by Republican Florida Senator Marco Rubio -- who called SOPA/PIPA a "potentially unreasonable expansion of the federal government's power to impact the Internet" -- other Senate Republicans followed suit and announced their opposition to the bill, including Scott Brown (MA), John Boozman (AK), Bob Corker (TN), and John Cornyn (TX), as well as several prominent House Republicans.

While support of SOPA/PIPA is still decidedly bipartisan, Republicans were the big movers to the opposition. Support for online freedom typically comes from progressives and libertarians, not conservatives. If the GOP makes Internet freedom a partisan issue, it could put an election-sized wedge between Democrats and their base.

Not that Republicans are sudden proponents of the First Amendment, and Democrats opponents. It's all about the money. Maplight.org found that the bill's supporters have received "almost 4 times as much in campaign contributions" from the industries advocating for SOPA/PIPA than those that oppose it. Republicans' shift against the bill could also be a naked gambit for entertainment industry lobbying money.

But bigger than all that was the discovery by the political world and the social media sites themselves of the power those sites have to influence popular opinion. We've never seen anything like it before. More than four million signed Google's anti-SOPA petition alone, and on a single day. Government email accounts and websites crashed under the weight of outraged American voters.

In short, Google, Wikipedia, Wired, Reddit, and all the other sites flexed their muscles and shook the world. Questions naturally follow as to how these sites use this newfound power -- certainly they'll try to control the debate about regulating Internet content -- but one thing's certain. There's a new sheriff in town.