Outgoing-Gov. Corbett signed over power of York district school board to businessman Dave Meckley, who then turned it over to Charter Schools USA.

by Jay Stevens
View ProfileFacebookTwitterGoogle+RSS Feed
January 7, 2015 at 7:45 AM 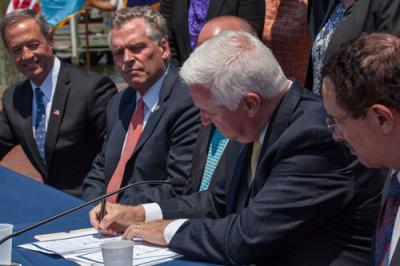 A judge this December granted the state's request to hand over all the powers of the York, Pennsylvania district school board to local businessman Dave Meckley, who has announced his intention in turn to hand over the schools to Charter Schools USA, a private charter-school management company. Barring a successful appeal, this will signal the first time in the nation's history that a for-profit corporation has run an entire school district.

This holiday season's gift-wrapped kick to York's – and the state's – groin is apparently outgoing-Gov. Tom Corbett's idea of spreading holiday cheer: Not content with merely gutting public education, he apparently wants to destroy it outright. Who knew he hated us so much?

The impending takeover is the end result of a series of politically manipulated events that started with Corbett's stripping of the state education budget the year he took office. Those cuts targeted the state's poorest school districts by eliminating grants and aid programs instead of making cuts across the board, and sent many schools into financial crisis, including York's, which suffered more than $8 million in reductions.

And then this summer, the Republican-dominated state assembly passed a law that set a fairly low threshold for the state to intervene with "financially distressed" school districts – not school districts suffering academically – and gave the state sweeping powers to wrest control of schools from local school boards. Corbett used those powers to appoint Meckley "chief recovery officer" for the York school district after it triggered the law by asking for an advance on its state funding, and Merkley soon announced his plan for handing York over to Charter Schools USA.

A 2011 study of Pennsylvania charter schools by Stanford University's Center for Research on Education Outcomes – or "CREDO" – found that only 25 percent of those schools make gains in math and reading scores over their public counterparts, and nearly half were worse. Those performance numbers were dragged down by the state's cyber charter schools, which have been an unmitigated disaster – that same CREDO study found that all of the state's cyber charter schools performed worse than public schools.

That's hardly surprising, given the widespread fraud and mismanagement that plagues Pennsylvania cyber charter schools, which has cost the state at least $30 million since 1997, according to the Center for Popular Democracy. Several state cyber charter CEOs have been imprisoned, indicted, or "retired" for fraud.

The second thing you should know is that for-profit charter school management corporations are concerned foremost with...well...profit, not education.

Charter schools' administrative expenses are typically higher than public schools' while spending less on students, as they dole out public money on lavish CEO and administrators' salaries. (One Pennsylvania charter CEO overseeing 500 students reported an income of $241,000 – compared to a state superintendent's salary of around $200,000, who supervises more than 5,000 students.)

Many charter schools, according to a report in the Arizona Republic, buy textbooks, maintenance and repair, and other services from the companies of board members and administrators. A prime target for cutting cost at charter schools are teachers. Not unionized, charter school teachers are subject to lower pay and have no outlet to express grievances or concerns about working conditions. As a result, the turnover rate for teachers is high, some schools losing as much as 50 percent of their staff each year. But that may be part of the plan – newer teachers earn less.

Most charter schools aren't required to follow the same financial guidelines as public schools and often hide behind that opaqueness to profit at the expense of the students and out of the public eye. When a school district hires a for-profit management corporation to run their day-to-day affairs, that corporation isn't obligated by law to act in the best interest of the students or taxpayers, and isn't required to disclose its finances.

Which isn't surprising, given Charter Schools USA CEO Jonathan Hage is a veteran from the ultra-conservative Heritage Foundation and a crony of the Bush family, having worked for Jeb Bush's Foundation for Florida's Future. Profit is the prize. In an almost gross caricature of himself, Hage even owned a yacht called "Fishin' 4 Schools."

And he's just the small fry, the guy to set up the deals. Because Wall Street is circling, jamming its vampire-squid blood funnel into the privatized school market.

Thanks to a Clinton-era tax loophole, investors in charter schools located in "underserved" areas collect tax credits to offset costs. Wealthy foreigners who invest in charter schools – as part of a plan to encourage foreign investment in development projects – can earn the right to buy U.S. immigration papers for themselves and family. As a result, millions are flowing into charter schools from private investment, and that money isn't being used to reimburse taxpayers.

The danger of these deep-pocketed investors eyeing schools as investment opportunity, with the York School District at its epicenter, is a massive privatization push into education, and the end of public education as we know it.
That's a crime. "Education, beyond all other devices of human origin," said public education's founding father, Horace Mann, "is the great equalizer of the conditions of men, the balance wheel of social machinery." Without fair and equal education for all, our society will further splinter into the haves and have-nots. While the majority of our children suffer in the future educational fast-food franchises, ingesting subpar and unimaginative instruction, only the children of the ultra-wealthy will be dining at educational banquet tables, monopolizing the opportunities they bring.