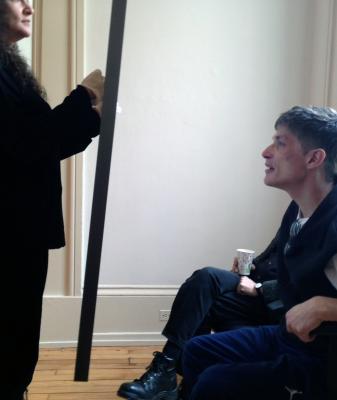 Juror Alexis Rockman decides on a submission during the selection process. By: Rebecca Styn

While the names have changed, the story remains virtually the same. Artists located within a 250-mile radius of Erie have the opportunity to enter up to three works that have never been previously exhibited in the community. Hundreds of works are submitted annually; yet, less than a hundred are chosen.

It is the Erie Art Museum Spring Show – an exhibit that has been a prominent staple since 1923 – and this year, the show is celebrating its 90th anniversary. And although nearly a century has passed, the show itself still carries much of the same tradition it did in its inception.

And with good reason.

Yes, the reach has broadened over time. The rules have shifted ever so slightly and the number of entries has grown. But it is still a live-juried show, wherein  a renowned artist handpicks the show based only on his or her personal criteria.

Each year is as different as each artist jurying the exhibit, making it an interesting and constantly evolving process. So, while a piece may not get in one year, it could essentially get in the next – with the sole stipulation that it's previously never been on exhibit in Erie before. The Spring Show is one of the few exhibits that remain this way throughout the country. So, the process, while once mainstream, is now unique to our Museum.

"The show has definitely grown over the years," says John Vanco, director of the Erie Art Museum. "In the beginning, we had less than half the entries we have now.  This year we have nearly 700, and that continues to remain our high point.  And we've also expanded its radius – upwards of 250 miles – so we could invite more artists – and frankly, I wanted better art and more of it."

Yet, while it's broadened its reach and opportunity, it's also inherently self-limiting. While people will drive here from around the tri-state area, when you get farther out, it becomes more of a challenge.

"This helps control the size of the exhibit but also allows it to be big enough to get an expansive sampling of work," Vanco explains.

And he tries to keep the number of works chosen to a minimum. "I always tell jurors I'd like between 80- and 90-some works," he notes. "Many of them struggle getting below a hundred – especially in shows of this size."

Many of the same artists submit pieces year after year hoping to get selected, and every year, a handful of newer or younger artists emerge since the exhibit is open to any artist at any time.

"It's the art and social event of the year," Vanco adds. "And everyone wants to know who gets in."

In previous years, jurors had been selected based on a social connection Vanco or individuals in the art community had had them.  Eventually, Edinboro University of Pennsylvania would be welcomed into the fold, expanding the process of naming a juror.

"For the past decade or so, we've been collaborating with Edinboro on this. The visiting artist committee, which is faculty members of the art department, make recommendations to me and in turn I provide my own comments and feedback," Vanco explains of how the juror is ultimately selected.

The relationship between the museum and the university has helped broaden the reach of potential jurors, and in turn, the juror spends some time lecturing or presenting to the students at Edinboro. This also affords the museum, the university, and the juror the ability to create a far-reaching impact in the greater Erie art community.

As for the reason it's still live, unlike many other exhibits of this size?

Each year is as different as each artist jurying the exhibit, making it an interesting and constantly evolving process. So, while a piece may not get in one year, it could essentially get in the next – with the sole stipulation that it's previously never been on exhibit in Erie before. The Spring Show is one of the few exhibits that remain this way throughout the country. So, the process, while once mainstream, is now unique to our Museum.

"The juror knows what the juror is picking," Vanco says. "You never quite know when you're looking at a projected image – some things look much better in an image than they do in reality – and vice versa."

So while more museums are judging submissions via slides that artists have taken of their work, our community – and in particular Vanco – feels it's vital that the individual work be seen live and handpicked – something that remains special to the exhibit and can be experienced through jury day.

With a live juror playing such a crucial and important role in this exhibit, I stopped down to visit our juror on, well, jury day to witness this flurry of activity. Held in the customs house of the Museum, at least a dozen of volunteers in addition to staff were on hand. All in casual clothes, and each of them white gloved, many of them were already in full swing, carrying individual works and parading them in front of the juror to see.

Works ranging from giclee prints to paintings, sculpture to ink – diversity of media, technique, subject, and viewpoint abound. And upon arrival of the piece, the juror quickly offered an affirmed "no" or "yes" and on occasion, a "maybe," and off the volunteer would go.

The "nays" were taken back to their original spot, the "yeas" were catalogued and moved forward, and the "maybes" were eventually brought back around a second time to receive their final answer. It's something I've witnessed many times before – as a previous employee and then board member of the museum – and the experience has always been priceless. In addition to being exposed to a range of talented artists, it was an opportunity to meet a renowned individual in the art world and spend some time getting to know them.

This time was no different. Though on this day, I sat in the judgment line [as I called it], only having a few moments to speak to the juror himself: Alexis Rockman.

A man whose works are featured in the public collections of the Guggenheim, Carnegie, Los Angeles Museum, and Moscow Museum of Contemporary Art – just to name few – Alexis Rockman is also a contemporary in today's art world. Rockman's works have been inspired by his travels around the world, and he is known for paintings that provide rich depictions of future landscapes as they might exist with impacts of climate change and evolution influenced by genetic engineering.

Though he would naturally not realize the impact it would have on his work until much later in his life, he would develop an interest in the natural world from the time he had his first visit to the Museum of Natural History in New York as a child. And although his upbringing was traditional by New York City standards – his dad was a jazz musician and his mother an archeologist at the Museum of Natural History – he didn't set foot in an actual art gallery until high school and it wasn't until college that he knew he wanted to be an artist.

"I went to art school by default because it's the only thing that made any sense to me at the time," Rockman says. "I loved to draw and I was hoping it would be something that would click. But I had no plan."

In the Early 1980s, Rockman studied animation at the Rhode Island School of Design and continued art studies at the School of Visual Arts in Manhattan, receiving a BFA in fine arts in 1985. "I somehow ended up in the painting department there, and that's when I fell in love with it all."

It was ultimately this marriage of the art and natural history worlds that would set a tone for his work. Even today, his paintings enhance this relationship exploring issues ranging from evolutionary biology to deforestation, often portraying a great deal of wit – a wit that carries through the conversations he has. I found myself laughing several times in the ten-minute conversation we had. He is charming and engaging and has no reservation telling anyone what he does – or does not – like. And I always find such candor quite refreshing.

His artwork has also made a great impact in the film industry. In 2009, he was invited by director Ang Lee to produce visual inspiration for his movie "Life of Pi," the blockbuster film that went on to win the most Oscars at the 2013 Academy Awards. His artwork for the film, which resulted from hundreds of sketches, also inspired a scene in the movie called "Tiger Vision," a nonverbal, hallucinatory trip that serves as an apparent mindmeld between the main character, Pi, and the tiger.

I offered that "Life of Pi" was the best movie I never wanted to see. I've never been one for animated films and yet this was far from simple animation. In addition to connecting with the characters, from the moment I sat down I was mesmerized by the technical marvel unfolding before me. And if it wasn't for Rockman's inspiration, I suspect I wouldn't have been half as captivated as I was throughout the two-hour film.

"I didn't want to read the book," he tells me. "But I loved the script. And the movie is fantastic."

And of all the things he's done in the course of his talented life, he's never served as a juror to a show.

"This is a new experience for me. And while I take this very seriously, the levity in the room loosens me up." As for his criteria? "I really don't have any. It has to be intuitive or else I go crazy. I try to figure what the person is trying to do and how well they do it. It has nothing to do with the medium and I have no major criteria." Certain work just appeals to him. "I tend to represent anything that looks manipulated, but I always appreciate the effort that the artists put forward."

The 90th Annual Spring Show opens on Saturday, April 20 with an opening reception from 7 to 9:30 p.m. in the main gallery of the museum and runs through July 7.