Cotterill's I Should Have Seen It Coming debuts at 1020 Collective 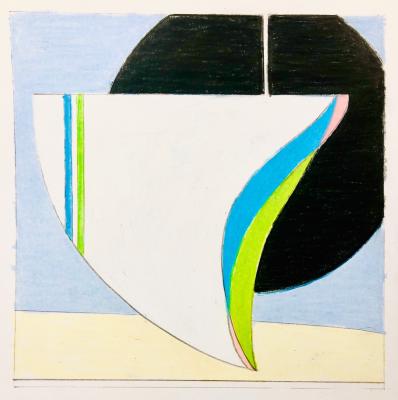 contributed photo
Justus Cotterill's China Girl (colored pencil and graphite), one of the pieces to be featured in I Should Have Seen It Coming, on display in 1020 Collective's upstairs gallery starting June 17.

You are at liberty to interpret the artwork of Justus Cotterill. In fact, he wouldn't have it any other way.

"What's important to me is that I am not making a statement, my art is strictly for 'art's sake' — there is no deeper message. Each painting is its own experience and not a comment on anything away from it," he explains. "I leave things fluid and open so that the viewer has the opportunity to take different things from the work each time they see it."

A fascinating interplay of colors and geometries pervades Cotterill's work, inviting those multiple looks. I Should Have Seen It Coming, an exhibition of drawings (colored pencil and graphite) and paintings premiering at 1020 Collective on Gallery Night, takes an almost synesthetic approach.

"With this body of work I was really reflecting back on my life and using music, or specific songs, to mark certain time frames. The pieces aren't literal interpretations of songs but instead are influenced by the feeling that is created when you hear a particular song, at a particular time, and it becomes a soundtrack to that moment," Cotterill clarifies.

His visual soundtrack ranges from pure abstraction to pieces with more defined, identifiable imagery. "I have been using some forms, such as the Dragon's teeth, which are taken from the anti-tank structures used in WW2, to these newer dark shapes that resemble stones, to be the stand-in for 'a presence.' The shape is not a portrait but rather a focal point that represents a witness to the experience." ("Age of Consent" and "Burn Down Disco" exemplify the use of these vaguely crystalline structures.)

Hold your mind's prism to the light and find your wavelength within Cotterill's vast artistic spectrum.