Summer Cannibals // Can't Tell Me No

Listeners are in for something special

by Nick Warren
View ProfileTwitterInstagramRSS Feed
July 17, 2019 at 8:15 AM 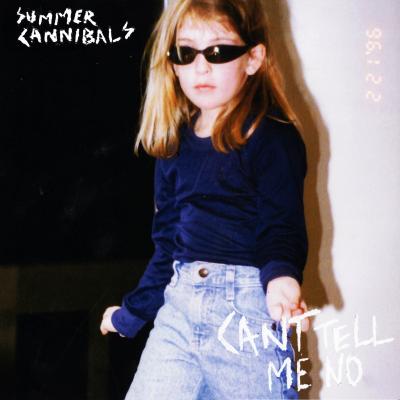 From the first riffs of the opening track "False Anthem," the listener can sense that they're in for something fairly special. As the catchy hook repeats, one is reminded of bands like Ex Hex, Menace Beach, and the garage rock and pop-punk acts of the 2000s like Sahara Hotnights and the Donnas. It's a fun sound, often running in opposition to its lyrical content, yet aptly suitable for summer, name and all (their moniker taken from a 1996 Patti Smith track). The quartet, hailing from Portland, Ore. is led by singer and guitarist Jessica Boudreaux. Can't Tell Me No is the band's fourth studio album (their prior record, Full Of It, was released on Kill Rock Stars), and has a much tighter, power pop feeling. The frantic fuzzy breakdowns of that record have been replaced with a more polished sound, marked by harmonized guitar lines and more subdued songwriting. Lyrically, it's an honest and sometimes confrontational comment on leaving a manipulative relationship (explicit in tracks like the closer "Into Gold"), one that Boudreaux experienced this year causing her to scrap a previous album and start anew on this one. — Nick Warren

Summer CannibalsCan't Tell Me No