A baker's dozen plus one festivals -- all within a five-ish hour drive from the Gem City. 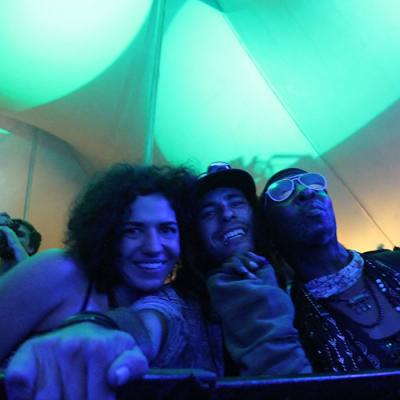 Fourteen Festivals within a Five-hour Drive of Erie

I got to head to the hills and get my ears filled with some summer sounds good and early this year – all the way back in March. And let me tell you, man, it was sweet, sweet music, enough to warm the soul up and down.

"I thought this was supposed to be an early bird party. Seems like the party to me," one of the Rumpke Mountain Boys –- a real wild and crazy bunch, to be sure – said to the bundled-up, dance-happy crowd (another wild and crazy bunch, to be sure) during one of their late-night sets at Hoopla in the Hills, a four-day, (very) early spring music and camping fest in what was still-chilly Athens, Ohio.

Another guy, doing a kinda loopy, weaving zigzag up and down the long line of cars filled with fest-goers waiting to get in and get down, stopped at my window: "It's crazy," he proclaimed with a big smile, a sorta blown-away, real out-there air all around him.

"But it's a good crazy," he said more quietly, like he was sharing a secret, before he hopped back off to wherever his road was taking him.

For me, when it comes to thinking about the spring and summer festival season, that just about sums it up: These gatherings can be weird, they can be wild, and, when the music's good and the vibes are right, they can be nothing short of wonderful.

And this year's season, with much music of note going on around the region, is just getting started.

So, here and now, for your information and enjoyment, dear Reader readers, we have compiled a list that highlights just some of the most noted and worth checking-out of the summer's music festivals. Some are nearby and some are a little further out, but, to make your trips easy, we've narrowed the list – which ended up being a good baker's dozen, plus one – to destinations that are within a five(ish)-hour-or-less driving distance from the Gem City.

Get those bags packed and ready, folks – here we go:

Hosted by Pennsylvania bluegrass favorites Cabinet (no strangers to Erie-area crowds, those fellas), this tasty little one-day-and-overnight fest – formerly known as Cabinet's Spring Fest – returns, as the newly-named Susquehanna Breakdown, to The Pavilion at Montage Mountain in Scranton on Saturday, May 10.

With a solid lineup featuring performances by Cabinet (of course), Sister Sparrow & the Dirty Birds, Marco Benevento, Floodwood, Melvin Seals, The Kalob Griffin Band, and a whole lot more, the Breakdown's gracious hosts say this year's festival – named "from a track on the band's most recent album, a nearby river, and a noisy, energetic American country dance" – promises to be even better than before.

Steeped in Appalachian-roots traditions and celebrating a decade of ushering in the summer festival season by welcoming great performers, artists, and an array of workshops – all free and open – right in Erie's own backyard, the Edinboro Art and Music Festival is Thursday, May 15 through Sunday, May 18 on multiple stages and various venues, both indoor and out, in the beautiful 'Boro.

For fans of some of the biggest and best names in modern jam, bluegrass, folk, and all manner of things in between, the Dark Star Jubilee is always, most definitely, a place where it's at.

Big enough to be completely awesome, but small enough to be low-hassle, the high-spirited Jubilee – hosted by Grateful Dead re-imagineers Dark Star Orchestra – starts Friday, May 23 and soars through Sunday, May 25 on the rolling hillsides of historic Legend Valley (home to a few of the Dead's most celebrated shows) in Thornville, Ohio.

This year's lineup includes three nights of sure-to-be-stellar Dead sets by DSO, along with long days and late nights filled with performances by festie favorites like Yonder Mountain String Band, Keller Williams, Galactic, The Devil Makes Three, The Wailers, New Riders of the Purple Sage, and many, many more.

One of a few premier new-age transformational art and music festivals to have started blossoming around the region in recent years, The Mad Tea Party Jam – Thursday, June 19 through Sunday, June 22 in Hedgesville, W.Va. – is described by organizers and hosts aptly as "an intimate rager where we all come together to love one another and transform our energies into a single creative collective."

Headlined by jamtronica masters like Papadosio, The Werks, and Dopapod, this year's musical lineup is otherwise packed to the gills on multiple stages, and, with a dazzling array of visual artists actively creating live works and installations throughout, tons of worthwhile workshops, and a whole lot of other out-there fun to be had, The Mad Tea Party Jam truly is the kind of place where art isn't just life – it's living.

A well-homegrown fest featuring some of Upstate New York's most must-see bands and performers, the Buffalove Music Festival returns to not-too-distant Silver Creek, N.Y. from Thursday, June 19 through Sunday, June 22.

This year's Buffalove includes main headliners Jimkata, along with two-nights-each performances by Funktional Flow, Aqueous, Mister F, and Slip Madigan, and, beyond that, a lengthy and colorful lineup of others who comprise some of New York's very finest.

Yet another fest that runs a long weekend from June 19 through June 22, the Family Roots Festival – which calls Smoke Rise Ranch in Glouster, Ohio its home – welcomes everybody in for four days and three nights of good-and-get-down live music, camping, art, and friendly vibes.

One of local fest-heads' long-standing (and well-deserved) favorites of every year, the Great Blue Heron Music Festival is one where, in my experience, everyone really feels like both family and friends.

It's Friday, July 4 through Sunday, July 6 at the beautiful Heron festival grounds in nearby Sherman, N.Y., and everyone, from longtime-goers to newbies, is welcome to join the family for a weekend in western New York.

Also on Independence Day weekend, GratefulFest 2014 – featuring Dead-centric performances by Melvin Seals, Rusted Root, and more – is one of many amazing festival events hosted throughout the summer by the fine folks at stunning Nelson Ledges Quarry Park in closeby Garrettsville, Ohio.

GratefulFest's full lineup is to be announced soon, according to organizers, so keep your eyes and ears out for additional word from the people of the Ledges soon.

Fully committed to celebrating truly great underground music, performance, and art, and with a firm-but-very-friendly emphasis on boosting, and making real, ideals like enlightenment, community, and social change, the Rootwire Transformational Arts Festival 2K14 – Thursday, July 17 through Sunday, July 20 at Sunshine Daydream Memorial Park in wild-and-wonderful Terra Alta, W.Va. – is the place to be for anyone who's looking for a little change of headspace.

Along with dozens of acclaimed visual and performing artists working their magic throughout Sunshine Daydream all weekend long, Rootwire 2K14's includes a stellar lineup of musical performances by headliners like Shpongle, Beats Antique, EOTO, Conspirator, Zilla, and many more mind-benders.

This is one two-day fest that lotsa folks from around here wait, with happy anticipation (and with good reason), all year long for: The good-and-intimate, and even more good-and-groovy, Gathering at Chaffee's.

Still nice and cozy, but having spread out a little in recent years to include more and bigger regional acts, the 2014 Gathering lineup is a veritable who's-who of local and area jam and rock favorites, including Aqueous, Spiritual Rez, Eric Brewer & Friends, Jimkata, Funktapuss, and Conehead Buddha to name just a few.

It's another one where you can expect awesome tunes, positive vibes, and to make new friends quickly.

You just might wanna get your head (and the rest of you, too) back to Nelson Ledges Quarry Park in Garrettsville, Ohio on Friday, July 25 and Saturday, July 26 for Summer Hookah 2014.

Always another big Ledges crowd pleaser, this year's Summer Hookah boasts headlining performances by ekoostik hookah and the Bernie Worrell Orchestra, with much more to be announced, according to organizers.

Now entering its 18th year, the Outrageous Universe Revival (O.U.R. Festival) – Friday, Aug. 1 through Sunday, Aug. 3 at Kevin Cole Farm in Panama, N.Y., is set to be O.U.R.'s best to date, according to organizers.

With a lineup like this – Hypnotic Clambake, Mosaic Foundation, Smackdab, Baby Gramps, Well Worn Boot, and a big bunch more – it sure sounds like it.

O.U.R. hosts Hypnotic Clambake said they've also further teamed up with the regional Active Artists Alliance and host-venue the Kevin Cole Farm to make this year's festival the best one yet, so, whether you've been there before or not, you may wanna check it out.

The Werk Out Music and Arts Festival

Another fest that goes a long way (purposely, of course) toward blurring the lines between artists and their audiences, The Werk Out Music and Arts Festival returns to historic Legend Valley in Thornville, Ohio from Thursday, Aug. 7 through Saturday, Aug. 9.

Hosted by American music legends the Allman Brothers Band, the Peach Music Festival returns for its third year to Montage Mountain in Scranton from Thursday, Aug. 14 through Sunday, Aug. 17.

For fans of the more traditional (in a manner of speaking), larger-sized, jam-heavy music fests, the Peach – featuring huge hitters like the Allmans, Bob Weir & Ratdog, Trey Anastasio Band, Tedeschi Trucks Band, Gov't Mule, and lots of other very-well-known acts – is big, it's beautiful, and it's most definitely worth the trip.

So there you have it, folks, in a nutshell.

But make no mistake – this list doesn't have nearly all of the festivals that may be well worth some of your hard-earned time and funds this summer season, many of which aren't all that far away from the Erie area. It's just a little taste of some of the sweetest things around.

So, if you're into it (or think you might be), start exploring around here, around there, and around everywhere. You'll be doing yourself a big favor, because, despite the way some like to naysay, good music – make that great music – and good people (make that great people) are still very much alive and well, and all around you.

Maybe, in fact, more than ever before.