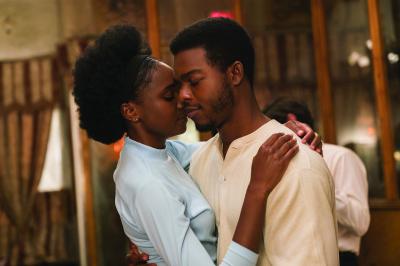 Barry Jenkins caught the attention of the world (and the Academy) with Moonlight, a touching and intimate story about sexuality and masculine identity that proved to be a powerfully emotional experience for many audiences, including this writer. His follow-up If Beale Street Could Talk was one of the most anticipated films of the year and I'm happy to say that it both exceeded expectations and firmly places Jenkins among masters like Wong Kar-Wai and Hou Hsiao-Hsien as one of the best chroniclers of the human experience working today.

Based on James Baldwin's 1974 novel, the film follows Tish and Fonny (Kiki Layne and Stephen James), a very young couple in Harlem who are just starting to work on their life together after Tish discovers that she is pregnant. However, when Fonny is falsely accused of a crime and incarcerated, Tish and her family find themselves doing what they can to raise money for his defense as well as racing to prove Fonny's innocence.

The film's story could easily fall into the traps of becoming a generic melodrama or political soapbox. Jenkins avoids these pitfalls by focusing intensely on the people caught in this dilemma, but also recognizes that this is a story that has affected (as an incredible supporting role from Bryan Tyree Henry attests) far too many people in this country. The result is a beautifully shot and powerfully acted story that deals with a tragically common problem in an intimately human way. I think when describing the films of Barry Jenkins, "intimately human" would be the best description. — Forest Taylor