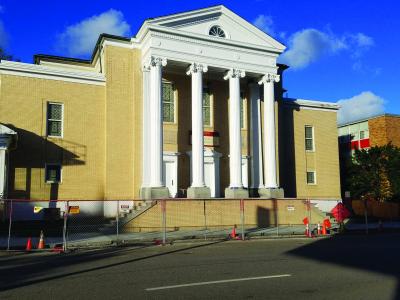 Next Friday will see the return of Gannon University's ever-popular Fringe Fest Erie. Based on the Edinburgh Festival Fringe of Scotland, this two-week event will feature a wide array of shows from both on- and off-campus production companies.

Things will kick off next weekend with open mic comedy nights on both Friday and Saturday evening, starting at 8 p.m. at The Knight Club. Here, students, faculty, and staff are encouraged to bring their own stories and jokes to share with a local crowd. Then, from Sunday, February 13th through Wednesday, February 16th, Schuster Theatre will be featuring an on-campus production of Endgame by Samuel Beckett. Originally produced in 1957, this one-act play from the writer of Waiting for Godot is an absurdist piece that ruminates on loneliness and the cyclical nature of life, utilizing only four characters throughout.

Finally, on Friday, February 22nd, members of the university's honors theater fraternity, Alpha Psi Omega, will be presenting 23:59:59, an imaginative spin on their annual 24 Hour Show, in which theater members are directed to write, produce, and present an original work in a 24-hour time span.

In addition to these three on-campus productions, shows from local theater companies will also be featured throughout the city. More information about those upcoming shows is coming and will be located on the festival's Facebook event page. It's the start of a new year, and there's never been a better time to support our diverse arts community. — Aaron Mook