Impassioned anxiety overflows from Oregon to Reading to Erie 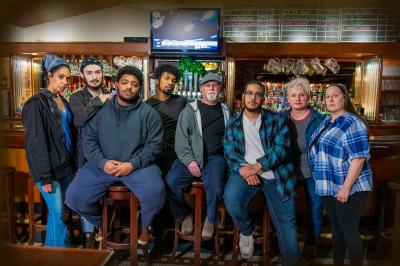 Lynn Nottage's Pulitzer Prize-winning play Sweat tells the story of working-class Americans in Reading, Pa. A close-knit community, these friends and coworkers have spent the majority of their lives sharing everything from drinks to secrets to laughs while working on the same factory floor.

When layoffs begin and picket lines emerge, the now-former friends find themselves pitted against each other in a fight to survive above the poverty line. What once brought these workers together could ultimately be the thing that tears them apart in this heart-wrenching, emotionally charged confrontation of the issues of race, identity, and middle-class life as we know it.

The play debuted at the Oregon Shakespeare Festival in 2015 before productions both Off-Broadway and on Broadway in 2016 and 2017, respectively.

The theater will also be partnering with Brandon Wiley and his company, Opened Eyes, to present several talkbacks and panel discussions regarding the many relevant and important topics addressed in the play. Opened Eyes is a local non-profit designed to help create a positive identity via a holistic diversity perspective.