Confessions from the dither of digital dating 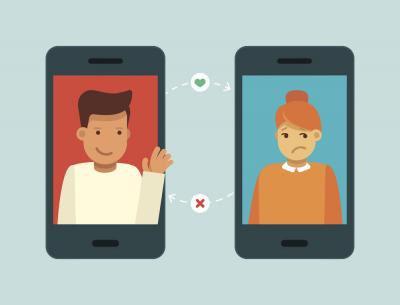 Venimo / Modified by Nick Warren
You may frequently say hello to rejection in your digital dating journeys, but never wave goodbye to your resolve.

It's Friday night; another workweek has ended and you are ready to "turn up." You broadcast your intentions to get it poppin'/bumpin'/twerkulatin' — and are greeted with only the sound of white noise and baby monitor feedback in return. Disheartened, you plunge your silly straw proboscis into a pouch of Franzia (Capri Sun-style) as the Best of Luther Vandross blares in the background, alternately inhaling Flamin' Hot Cheetos and weeping feebly into a dachshund throw pillow.

A Pew Research Center study published in early 2016 found that 15 percent of American adults have subscribed to an online dating site and upwards of 40 percent utilized a mobile dating app. In 2005, 44 percent of Americans agreed that online dating was a good way to meet people. In 2015, that number had risen to 59 percent. In that same time frame, the number of pundits who claimed online dating is the dominion of desperate losers dropped from 29 percent to 23 percent. Likewise, brownie consumption per capita has decreased by one half sheet over the past decade.

Changing attitudes toward technologically-aided dating (as well as technology itself) have given rise to a host of new apps, each with their own twist or gimmick. For example, Hinge limits matches to those with whom you share mutual Facebook friends. Tastebuds uses musical tastes as the basis of its matchmaking algorithm. Happn (somewhat creepily) pairs you up with people you've actually been in close physical proximity throughout the day — who happen to be fellow Happn users, of course.

Despite the novelty of these approaches, the simple dichotomy of swipe left or swipe right continues to reign supreme. Tinder ranks in the top 10 grossing apps all-time on both the iOS and Android platforms. Bumble, which relies on the same mechanic (with the very notable difference that the female user must send the first message in heterosexual pairings), has eclipsed established apps such as PlentyofFish and OKCupid for second place in the virtual dating arena. Having garnered such popularity and lacking a cost of admission — while also being relatively non-committal — Tinder and Bumble are common deployment points for fresh recruits to this strange (and often savage) new world.

If love is a battlefield, finding it is a war in itself. For many singles of the new millennium, the theater has shifted from the bar, club, or tavern to the smartphone, laptop, or tablet. For better or worse, dating apps have seized the position of power in modern romance, and we must either learn the rules of engagement or be left behind, egos bruised and hearts bleeding. Even Colonel Strong Vincent or Commodore Oliver Hazard Perry would balk at such carnage. But do not give up the ship; do not sink into a bay of misery —at least until you commiserate with us first.

Where I've been: Rigid in my determination to meet someone the "old-fashioned" way, I long stood as a bulwark against the riptide of peer pressure, refusing to be swept into the online dating pool. However, the older I've become, the harder it's been to meet anyone organically. Tinder seemed more promising than, say, canvassing local pinochle and bridge clubs for leads on single granddaughters. Or asking the people that clean my office at night: "Hey, any cute janitor friends you could set me up with?" My mistake.

After my initial travails with Tinder, I turned to Bumble. Then, at the behest of my brother and his fiancée, I signed up for eHarmony, praying to encounter an option even the slightest bit less flaky than the 2 for $4 Croissanwich deal at Burger King. But the fact that I stash Burger King coupons may suggest I'm not ready to walk/waddle down the aisle with anyone just yet.

What I've seen: The scattered bones and shattered hopes of all those who've come before me. In my experience, your standard Tinder match brings to mind the killer bunny rabbit from the movie Monty Python & The Holy Grail — sure, she may look cute, but before approaching you'd better pack a holy hand grenade of an intro or you're history. Once you get that far, you must traverse the tightrope of flirty-yet-respectful conversation, neither withholding too much nor giving too much away. Truth is, if she doesn't look like the hind end of a lowland gorilla, she's probably broverloaded with suitors. She's only as unforgiving as a Soviet ballet instructor because she has to be.

Bumble, while producing far fewer matches, has generally led to more fruitful conversation. Since it empowers females to make the first move, and that first move is usually a "hi" or "hey," the conversations tend to resemble regular, healthy human interaction. EHarmony will ignite a new passion for giving and receiving personality surveys, if that's not something you already inherently possess. "In the past month, how much have you thought about commending yourself to a monastery? On a scale of 1-5, with 1 being 'minimally' and 5 being 'I've already shaved my head.'" Four.

Thoughts and prayers for the women of online dating: On behalf of my fellow man, I apologize for the recycled jokes, the flat and lifeless personalities — and, most of all — any picture, illustration, or daguerreotype of genitalia that you never asked to behold. I'm equally appalled. While I get the impression that a good many of you derive a sort of deranged glee from watching our comedy of errors unfold, I also know that as many or more sincerely want to meet that special someone that you'll never once have to call the cops on.

What's the 814 got to do with it, got to do with it: It may seem as if the only thing bred from dating apps is cynicism, but that is not entirely the case. You can meet fascinating, beautiful women here in Erie — and I have. Even foreign women from exotic locales such as New York State (!).

The education and healthcare fields both have an established presence here and attract a disproportionate number of females, so there are candidates to research. If you can swim, there are even more (the apps are GPS-based and do not account for Lake Erie, so prepare to swipe through plenty of Ontarians).

In general, yes, the process is so shallow you could wade through it. But there's nothing to lose by keeping every bridge of communication open. Who knows? Ms. Perfect may come stepping over that McBride Viaduct and into your heart (and/or bedroom, if that's what the two of you are after). Don't knock it down before you try it.

Where i've been: Oh boy. You name it, I've tried it. From my early days as an undergrad in a bigger city, when I met a college boyfriend through Myspace (don't judge me or my advanced age, I'm a Millennial, dammit!), the past decade-and-a-half-or-so has been an interesting dating adventure. I moved back to the Erie area in 2004, and since then I have tried: Plenty of Fish, OkCupid, Craigslist personals, Tinder, Bumble and even Whisper, in order to broaden my horizons and meet new guys.

What i've seen: If there is one thing that I've learned from all of this, it's that dating profiles are a double-edged sword. On the one hand, you do get a decent amount of information about what this person is like before you meet them. On the other, it tends to reach you through a heavy-handed self-applied filter that often leaves out some important or deal-breaking personality quirks. For example, no dating site was specific enough to inform me ahead of time about the guy who left his beige socks on every time we hooked up. First of all…beige. Second of all…socks. I wonder, was beige an effort to camouflage his socks from anti-socks-during-sex partners? "Ha-HA, she'll never notice!"

Thoughts and prayers for the men of online dating: From what I have seen of the online dating scene in Erie, the guys have it rough, generally speaking. I can guess three reasons for this: 1. Women tend to put up barriers and micro-analyze all interactions because we're just trying to keep ourselves as safe as possible; 2. A lot of men don't seem to know how to talk to women in a way that is appealing to us (and don't care); and 3. Those guys wear us women down and make us less responsive to the men who are really trying.

Now, don't get me wrong, I have received a surprising number of pleasant, interesting and respectful messages via all of the sites/apps I mentioned; however, for every one of those, there are probably 10 or more messages that clutter the inbox with their one line (in some cases, one word: "Hi" — and nothing else), their creepiness ("Are you a big eater?") or their out-of-left-field verbal abuse (who hurt you, USAUSA_69?).

What's the 814 got to do with it, got to do with it?: The number of warm bodies in the city of Erie is shrinking, and with it the population of dateable people. When you start with the number of single people, then narrow it down further based on personal preferences, you are left with a rather small pool. On the plus side, I would venture that most single, datable people in this area use, or have tried, online dating sites. The downside is that certain social circles are pretty small and contained, so if you're an outsider joining one of these friend groups by way of a Tinder match or an OkCupid meet-up, you could be entering a whole world of history and drama that you didn't ask to be a part of.

I personally have had more luck meeting men the old-fashioned way — by going about my life and having chance meetings, whether it's in grad school classes or while grabbing beers at Lavery with friends. But, in a city like ours where the population belies the saying, "There are plenty of fish in the sea," it never hurts to keep your options — and your mind — wide open.