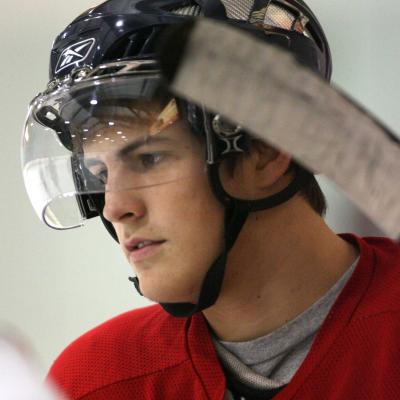 A night after Ramis Sadikov shined in his return between the pipes, the Erie Otters have another player finding his groove at the right time.

Andrew Yogan, who has played just eight games this season after offseason shoulder surgery, recorded a hat trick, and Shawn Szydlowski scored the game-winning goal in the fifth round of a shootout to secure Erie's six straight win with a 5-4 victory over Midwest Division rival Kitchener in front of 5,166 at Tullio Arena.

With the win, Erie moved into a tie with the Windsor Spitfires for fourth place in the Western Conference, which is where the Otters want to finish to secure home ice advantage in the first round of the playoffs.

"Momentum going into the playoffs is huge," said Yogan, who found the back of the net for the first time since February 24, 2010. "We're confident in ourselves that we're going to go really far (in the playoffs). That was a character game for us."

After an uneventful first period, Yogan singlehandedly put the Otters ahead 2-0 with his first two goals of the season.

"He's shooting the puck the way he used to shoot it," coach Robbie Ftorek said of Yogan. "If he gets one, he usually gets a few, and that's what happened tonight."

After Jerry D'Amigo cut the Erie lead to 2-1, Shawn Szydlowski ripped a shot past Kitchener goalie Mike Morrison for his 39th goal of the season, a career high for the fourth-year overage winger, to restore the two goal advantage.

Erie had a great opportunity late in the second to put the Rangers (38-18-4-5) in a deep hole on the power play, but instead, Gabriel Landeskog scored short-handed to bring his squad back with the first of his two goals on the evening.

Sadikov, playing in his 56th game of the season, was a bit shaky in net in his second game since returning from a leg injury. The Russian stopped 30-of-34 shots, the first time he has allowed four goals since February 5.

"I don't think (Sadikov) played the way he was capable of playing," Ftorek said. "Which is OK. It was his second game in two nights."

But before the wild second period – a combined six goals and 26 shots – ended, Yogan would complete his hat trick with a great individual effort that ended with a wrist shot that went under the arm of Morrison.

"I'm just starting to feel more comfortable on the ice," Yogan said. "It felt great. I want to have an impact come playoff time."

With a 26-3 record when leading after the second period, it seemed the Otters were well on their way to their 23rd victory at home, which is second best in franchise history,

Kitchener wasn't buying that, as Landeskog and Michael Catenacci scored the only goals in a period where the Otters were lifeless throughout and led to overtime in a game they were in full control of.

"We played very well the first two periods and then fell apart," Ftorek said. "They took advantage of their speed."

Erie had just seven shots in the final 20 minutes, compared to the Rangers 11.

With nothing being resolved in overtime, the 4-4 tie shifted to a shootout, where the Otters are 3-1coming into Saturday, including two over the OHL's best team – Mississauga.

After the first two skaters on each side were stoned by the respective goalies, Brett Thompson put the first goal of the shootout past Morrison for a 1-0 lead.

Landeskog answered right back to extend the game for the Rangers and his shot darted through the legs of Sadikov for his team's first goal of the session.

After Erie's Derek Holden and Kitchener's Tobias Rieder couldn't find the back of the net, it was Szydlowski's turn to try and beat Morris.

He skated in, deked to his right and lifted the puck over a sprawled Morrison to put Erie ahead 2-1 in the shootout.

"It's all about angles, just working with what the goalie gives you," Szydlowski said. "(Morrison) was kind of cheating to the one side on me, so I decided to go back to his glove side and it ended up working."

Despite playing below what the fans are used to seeing, Sadikov stopped Matthew Tipoff for the most important save of the evening, which secured the 38th win of the season, the third most in franchise history.

Erie has two more games left in the regular season, which ends March 18 in Saginaw. They have two games left to build on the momentum that they have given themselves the past six games heading into the playoffs.

"There's a lot of confidence in the locker room right now," Szydlowski said. "We have to be solid next week. We have to go there, play our game and pick up another two wins.