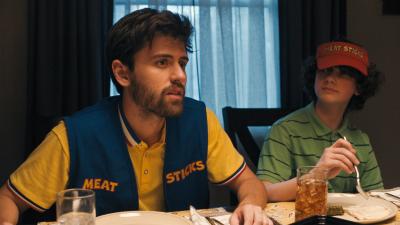 Rating: Four and Half stars out of Five

Some of the best films ever made are filled with small, quiet moments and intimate gestures between people. As luck would have it, these are often the most difficult to write about. Films with big ideas and full of impressive technical mastery are easy to explain, but what makes a simple story like Cooper Raiff's Cha Cha Real Smooth so engaging? I think the key lies in its universality and deep empathy that makes it easy to tap into some unspoken truths about our particular time and place. Call it The Graduate for Generation Z and you have a slight understanding of the film's appeal.

Raiff plays Andrew, a recent college graduate who doesn't quite know what he wants from life and is seemingly ambivalent to the idea of entering the "adult world." After an invitation to a bar mitzvah ends with him being the life of the party, Andrew pursues a possible career as a "party starter" and during one such party, strikes up a friendship with Domino (Dakota Johnson) and her autistic teenage daughter Lola (Vanessa Burghardt). As the friendship grows, it becomes complicated as Andrew realizes that he's falling in love with the much older Domino.

As said before, the film succeeds through its earnestness and empathy for its characters. The performances from Raiff and Johnson give off a naturalistic, unsentimental relatability. But the real standout is Vanessa Burghardt who gives us the rare portrayal of autism that is neither cloyingly precocious nor insultingly one-note. These performances turn the film into a sweet, funny, deeply romantic slice of life whose appeal is near universal. Cha Cha Real Smooth is currently playing in select theaters and is available on Apple TV+. — Forest Taylor