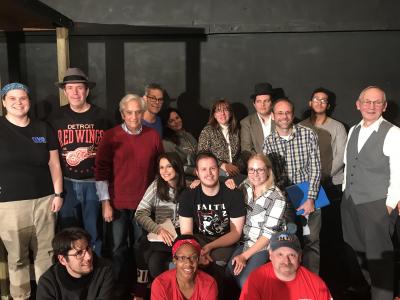 If you thought perhaps your family had cornered the market on dysfunction, you might need to fill a seat in Little Italy's own All An Act Theatre some time during the run of their latest production, You Can't Take It With You.

Penned by George S. Kaufman and Moss Hart, You Can't Take It With You was first produced all the way back in 1936 and introduces us to the zany, eccentric Vanderhof family, including patriarch Grandpa, his daughter Penelope (Penny), her husband Paul and their two daughters, Essie and Anne, Essie's husband Ed Carmichael, his assistant Mr. De Pinna, plus Rheba the maid and her boyfriend, Donald, the family handyman.

Still with us? Anne is in love with Tony Kirby, the son of the executive at her company of employment, and he most certainly returns the affection, to the point that they want to get married. The only barrier, in Anne's mind, is her kooky family, who end up horrifying Tony's uptight, well-to-do parents.

Add in some fireworks manufacturing, a co-plot involving Grandpa's shady tax history and a few more minor characters — like Essie's ballet instructor, the tax investigator, a drunk actress and a Russian noblewoman, now an émigré in the United States— and you have a full-fledged romp on your hands, full of fast-paced dialogue, slapstick comedy and a reminder about what's important in life.

If you can't make it to opening night, have no fear; You Can't Take It With You will have a nice long run throughout the month of November — something for which the Erie community can collectively be thankful. — Cara Suppa